The funniest moments from the 2018/19 A-League season

Though it sometimes lacks for on-field quality, the A-League consistently creates moments which could not be replicated anywhere else in the world.

From Kerem Bulut’s famous offside celebration, to the single-finger salute from Central Coast Mariners’ sauce-bottle mascot, the A-League is truly the MVP in producing priceless moments of humour.

We take a look back (in no particular order) at the nine funniest moments from the current A-League season.

It seemed Central Coast Mariners were destined for another disappointing result against eventual-Premiers Perth Glory, already down a goal early-on.

Little did they know, this would be a loss like no other.

Perth’s Tomislav Mrcela ran into the back of the Mariners’ net after heading home an offside goal, snapping the stanchion in the process.

It would take over 40 minutes of scrambling before the on-field staff were able to repair the post, in scenes truly-befitting the A-League’s status as meme MVP.

I don’t know why, but it feels like an age ago that Usain Bolt was trialling at Central Coast.

With the first touch of an elephant, and little-to-no footballing experience, there was little to tout except the potential exposure his presence could bring to the league.

His brief stint at the Mariners’ was highlighted by two goals in pre-season friendly against Macarthur South West United.

That Fortnite celebration tho 😫😫😫 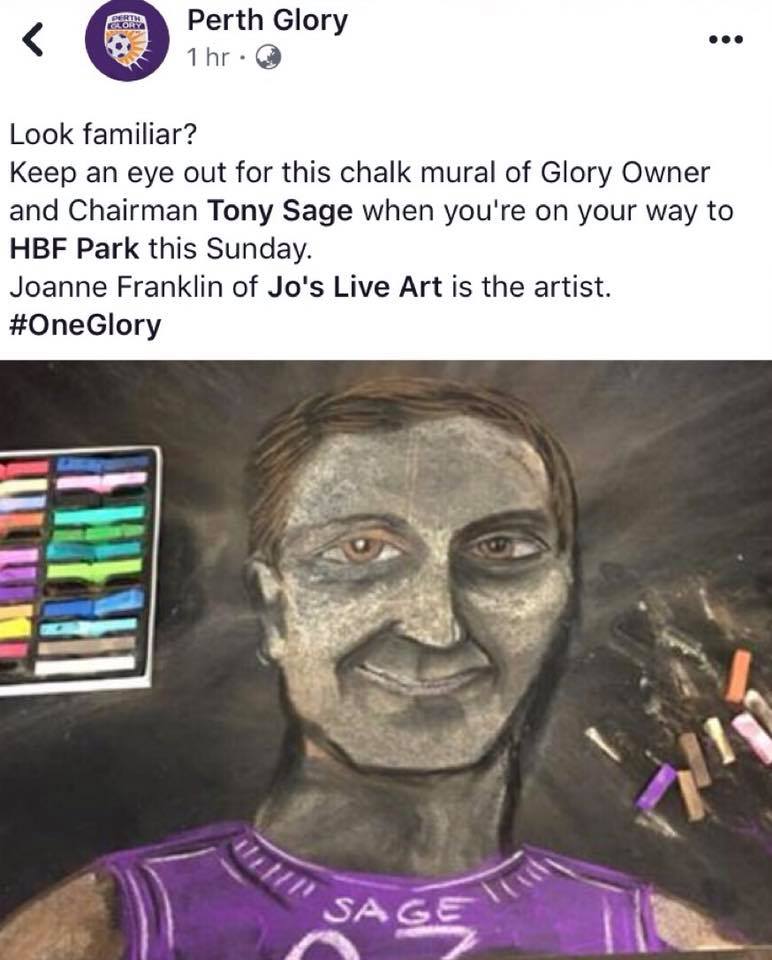 A recent study found that Western Australia was the highest consumer of meth in the country – around 1 in every 17 people on the drug.

I’m almost certain the creator of this chalk drawing of Perth Glory owner Tony Sage contributed heavily to that statistic.

While not technically taken this season, a bizarre photo-set from current Melbourne Victory coach Kevin Muscat’s playing days did the rounds on Twitter recently.

Short of Muscat starring in a football-themed remake of the Michael Myers’ Halloween franchise, I’m not quite sure what the photographer was going for here.

A universal fan-favourite, Mark Bosnich got a little bit heated during the pre-game coverage of a Melbourne derby earlier this season.

Dylan Wenzel-Halls having a fondle

For a man as full of banter as Rhyan Grant, he didn’t seem too happy about young whipper-snapper Dylan Wenzel-Halls having a stroke of his glorious mullet.

Keisuke Honda almost getting into a bit of trouble for his announciation of the word Fact. pic.twitter.com/aRyiAqWjbk

No, Kevin. Honda said it right the first time.

Vedran Janjetović had a moment to forget after needlessly giving away a corner that led to a 96th-minute equalizer. #BRIvWSW pic.twitter.com/NAAyXT2hEX

Vedran Janjetovic is the gift which keeps on giving.

This moment against Brisbane Roar easily tops his brain-fade earlier in the season against Sydney FC – a laughably bad handball outside the box.

We began this list at Gosford, so we may as well finish it there.

With goal-shy Western Sydney Wanderers just beginning to gain momentum in the A-League Women, there were high hopes for another three points against Melbourne...

Up 2-0 against Brisbane Roar, Wellington Phoenix felt the weight of finally experiencing a lead, and this weight got the better of them in...

Reigning A-League Women champions Melbourne Victory hit the ground running this season but have shown signs of weakness in recent weeks. Semester Summary: After a...

Where are they now? The last seven A-League Young Footballers of the Year

If A-League clubs were NBA Franchises