Which nations have scored the most goals in the A-League?

Goals win games. So the question that should be on your mind is: who scores the goals?

Thanks to stats from Ultimate A-League, we have a nation-by-nation break down of every goal ever scored in the A-League. Spoiler alert: there has been a lot.

With that out of the way, let’s dig into some juicy data! 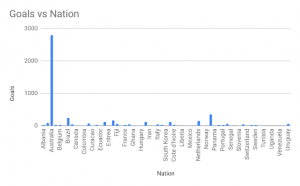 Pack it up and go home folks. In what will come as a complete shock to everyone everywhere, Australians have scored the most goals in the A-League.

But as is obvious, that graph isn’t very helpful, although we can tell that Australia are by far and away the nation with the most goals with 2802. For comparison purposes, below is a graph that shows the percentages for how many goals a nation has scored. 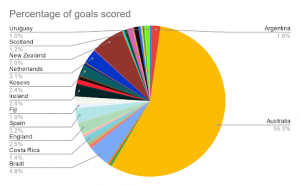 It’s rather one-sided, isn’t it?

All nations that have scored less than 20 goals have been removed for clarity purposes, as has Australia as we already know that they’ve scored the most.

With 350 goals, I’ve also removed NZ, the second-highest scoring nation as again they’re too far ahead of the rest of the pack.

If you are curious about just how many each nation has scored, there is a table with that down the bottom. 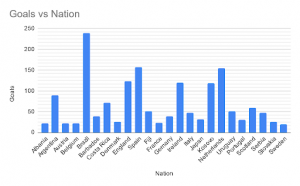 Our final graph presents the facts – outside of Australia and New Zealand, Brazil has scored the most goals in the A-League. With players such as Henrique and Gui Finkler tearing it up in the past, the Brazillian tally is 239.

Following the Brazilians, it’s Spain who takes second place with 157 goals, while the Netherland’s haul of 154 gives them bronze.

England, Ireland and Kosovo are the only other nations that get into triple digits, with the trio of nations having scored 123, 120, and 118 respectively.

0
In mid 2010, two young lads broke into a recording studio. One year on and the brain child of Jack Quigley and Christian Layland...
Read more
New Zealand

0
In May 2019, Des Buckingham brought a New Zealand team to the FIFA U-20 World Cup that was bursting with talent. One year on,...
Read more
Brisbane Roar

0
The most Football Sack article to exist now exists. Sydney FC: The Opinion piece http://gty.im/1212320077 Sydney are the best team in the A-League. The opinion piece is...
Read more