Who is the greatest Socceroos coach ever?

Since playing their first international match nearly 100 years ago in 1922, the Socceroos have had more than 30 coaches lead them through friendlies, qualifiers and international tournaments.

It’s a topic of hot debate amongst Australian football fans, who is the best Socceroos coach ever?

To be considered in this article, the coach had to have been in charge for more than ten games or have coached at an international tournament.

In the end, we are left with 17 coaches who qualify, starting with Joe Vlastis in 1967 and ending with Graham Arnold as the present-day coach. Some coaches have had multiple stints in charge, being Les Scheinflug and Graham Arnold.

Scheinflug had multiple stints as caretaker and these have not been taken into consideration. Arnold was in charge from 2006 to 2007 and returned to the role in 2018. Arnold’s two stints as head coach will be statistically separate but he will still be considered as one.

There is only one coach in the list who was not in charge at an international tournament and that is Jim Shoulder (1976-1978), who was in charge of 47 Socceroos games.

The two statistics that were looked at first were total games in charge and total wins. 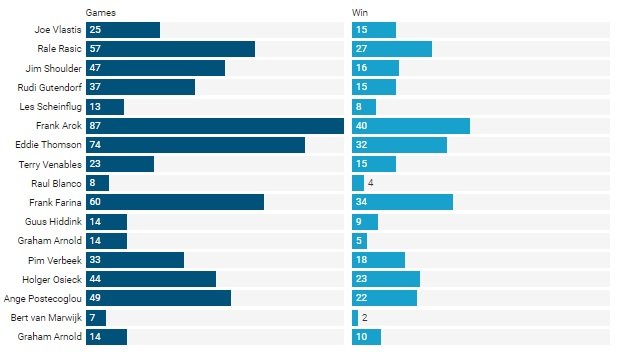 Frank Arok (1983-89) was in charge for the most games and has the most wins. However, his win percentage is not as strong in comparison to many of the other coaches.

At the other end, the coach with the lowest amount of games in charge also has the lowest number of wins and that belongs to Bert van Marwijk.

Van Marwijk was only brought in just before the 2018 World Cup in Russia and was replaced straight after by Arnold.

The highest win percentage is Arnold but only in his second stint. After 14 games in charge, Arnold has gotten 10 wins at 71 per cent. However, when you add his two stints together you get a total of 28 games with 15 wins, a win percentage of 53.6 per cent. 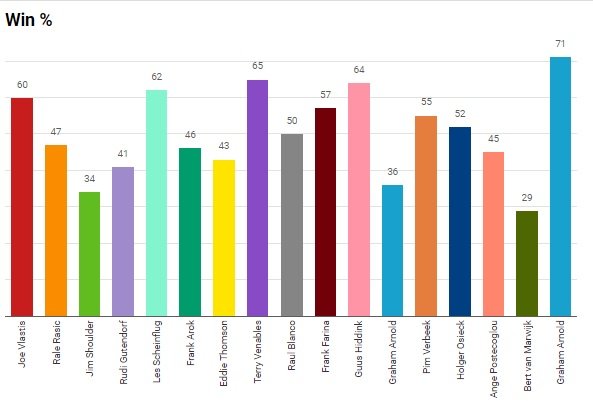 After calculating Arnold’s combined win percentage, the highest one falls to Terry Venables at 65 per cent.

Venables led the Socceroos from 1997 until 1998, through the Confederations Cup where they finished second behind Brazil. This would be the beginning of a new era for Australian football, as some of their most memorable moments were to follow.

Frank Farina had arguably one of the most successful reigns as Socceroos coach, winning 34 of 60 games, at a percentage of 57 per cent. While it’s not the best percentage, Farina experienced great success in international tournaments. He led the side to two OFC Nations Cup titles, with one-second place finish, and finished third in the 2001 Confederations Cup.

Farina’s replacement had the second-best win percentage of all coaches. Guus Hiddink may have only been in charge of 14 games, winning nine of them for a win rate of 64 per cent but he is also the man responsible for what is arguably two of the Socceroo’s greatest moments.

Hiddink got the team through to their first world cup since 1974. In the 2006 World Cup, the Socceroos managed to make it out of the group stage for the first time ever and it’s a feat yet to be matched by another coach.

The man who led Australia to their first ever World Cup in 1974, Rale Rasic, was in charge from 1970 until 1974. He led the squad through 57 games, ending with a percentage of 47. Australia had never appeared at a World Cup before 1974 and the team was largely made up of amateur players, making the feat even more remarkable.

In 2006 Australia joined the Asian Football Confederation, which was seen as the way forward for football in Australia. The team at the time is often referred to as the ‘golden generation’ for the Socceroos. Arnold’s first stint in charge saw the Socceroos make their first-ever AFC Asian Cup, before they bowed out in the quarter-finals.

After Arnold left the job he was replaced by Pim Verbeek. Verbeek led the squad to 18 wins in 33 games, a percentage of 55, and to the 2010 World Cup. They failed to make it out of the group stage, but it was the Socceroos last win at a World Cup, as they beat Serbia 2-1.

Verbeek was replaced by Holger Osieck, who won 23 of his 44 games in charge. In his three years in charge the Socceroos finished second in the 2011 AFC Asian Cup, losing 1-0 to Japan in the final, and qualified for the 2014 World Cup, Australia’s third successive World Cup. After successive 6-0 defeats, Osieck was replaced by Ange Postecoglou.

Postecoglou had a successful time as Socceroos coach. His time began with the 2014 World Cup, in which Australia was put into the group of ‘death’. Despite performing admirably, they failed to make it past the group stage.

At the beginning of 2015, Australia hosted the Asian Cup, which they went on to win, claiming their first trophy in Asia. Postecoglou also led the Socceroos through the 2017 Confederations cup, putting in some solid performances but ultimately not making it past the group stages.

Before resigning, Postecoglou qualified for the World Cup and won 22 of his 49 games. He was replaced by Bert van Marwijk for the 2018 World Cup.

Following the 2018 World Cup van Marwijk was then replaced by Graham Arnold, for his second stint in charge. Arnold started off by making it to the quarter-finals of the Asian Cup, bowing out to the United Arab Emirates. With World Cup qualifications only starting a few months ago, Australia has enjoyed a solid start, winning all four of their games so far.

After looking at all the statistics for the coaches, it can be narrowed down to three that can be considered as the best. These are Farina, Guus Hiddink and Postecoglou.

Hiddink led the Socceroos to their first World Cup in over 30 years and to their best finish at the tournament after losing to eventual champions Italy in the round of 16.

Postecoglou had admirable performances against top sides at the 2014 World Cup and 2017 Confederations Cup. He also went on to win the Asian Cup in 2015, Australia’s first trophy as part of the AFC.

Farina led the Socceroos through an astonishing five international tournaments, the most of any coach. He won two of them, finished second and third in others, while also making it to the group stage of the Confederations Cup. Perhaps the most memorable part of Farina’s reign is the record-breaking 31-0 win against American Samoa in a World Cup Qualifier.

While Asia is a different level to Oceania, you can not deny the incredible success Farina had as coach and while the golden generation is referred to as the side from the 2006 World Cup, the majority began their international debut during Farina’s reign.

Farina has had the most success as Socceroos coach and this makes him the best coach to ever lead the Socceroos.

Football Fix: What to watch during isolation