First off: Read Nerisa’s full rundown on the situation.

Fowler responded to Nerisa’s request for more youth in the team by asking if she was a fan and later a 12-year-old.

To top it all off Fowler then asked Nerisa why she had removed her place of employment from her Twitter bio.

Before his fans took it upon themselves to send a barrage of online abuse her way, as Fowler remained silent. 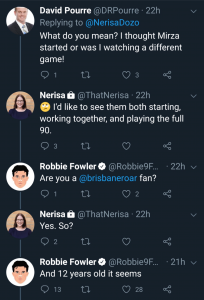 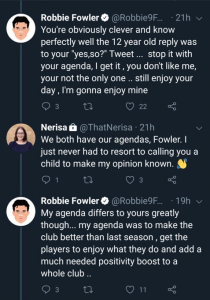 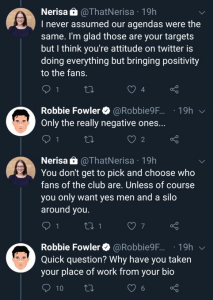 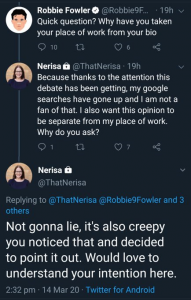 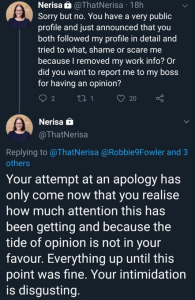 Fowler is a former Liverpool legend and has a twitter following of 1.1 million.

Following his tweets, his dedicated followers scrubbed the internet for anything and everything to make Nerisa’s life hell.

Only a few hours after the exchange, she would allegedly receive a voicemail saying “so easy.” Alluding to the fact his band of followers thought it was “easy” to get her personal information.

When you are a person with a large loyal fan base on social media you must be aware of your powerful position.

Your fans hiding behind a keyboard and an anonymous name, hurling abuse at a person has consequences. Especially when you remain silent.

For example in late 2019, it emerged that graduate student Brooke Nelson tried to keep author Sarah Dessen from being chosen for first-year university reading lists.

Dessen tweeted about this and thanks to the harassment Nelson deleted her social media and became concerned about her career.

Nerisa has since deleted her Twitter account and the closest thing we have to an apology is Fowler deleting his tweets.

This is not good enough.

It may not be on the pitch, but unprofessional conduct like this warrants more than silence.

We can not let this be swept under the rug and let Fowler think his behaviour was acceptable. Because right now, we are allowing that to happen.

Fowler must be held responsible for his actions and acknowledge the damage his tweets did. The FFA has to step up and show it has zero tolerance for this.

But if this issue slips out of the public eye, which it could very well do, then Fowler will get off scot-free.

SokkahTwitter has been great at making sure Nerisa’s harassment does not slide into obscurity. Yet without support from the media, nothing will happen. Unfortunately, the media has been silent.

I can understand why journalists are reluctant to criticize Fowler and Roar. When you cover the A-League you rely on clubs to give you access to games and to players. Without the clubs, we can not do our job.

But we can not ignore unprofessional behaviour. We can not stand idly by while a fan gets stalked and forced off social media by a coaches fan base.

No one deserves to go through what Nerisa has, and is, going through.

Robbie, you must apologize.

In mid 2010, two young lads broke into a recording studio. One year on and the brain child of Jack Quigley and Christian Layland...
Read more
New Zealand

In May 2019, Des Buckingham brought a New Zealand team to the FIFA U-20 World Cup that was bursting with talent. One year on,...
Read more
A-League

The most Football Sack article to exist now exists. Sydney FC: The Opinion piece http://gty.im/1212320077 Sydney are the best team in the A-League. The opinion piece is...
Read more
A-League

With no more games in New Zealand this season, the Wellington Phoenix said farewell to their home by doing what they did best -...
Read more
Love your football?
Subscribe to our weekly football wrap. During the season we'll send you all the week's football action straight to your inbox.