I’m worth it! How Roar keeper plans to keep number one jersey

Georgina Worth has waited a long time to become the Brisbane Roar’s main goalkeeper in the W-League and she is set to take the opportunity with both hands.

The Brisbane Roar goalkeeper said it had been a difficult journey breaking into the starting side since joining in the 2016/17 W-League season.

“This is my fifth season at the club, so it’s been a long time coming,” she said.

“I think as a keeper you’ve got that unique role where opportunities don’t come up as much especially if you’re a young keeper coming through.”

Worth was previously the Brisbane Roar’s second choice to Matildas goalkeeper Mackenzie Arnold whose work ethic and dominance as a keeper stood out to the young back-up.

“I learnt a lot from her [Arnold] and we got along really well at training and off the field as well. 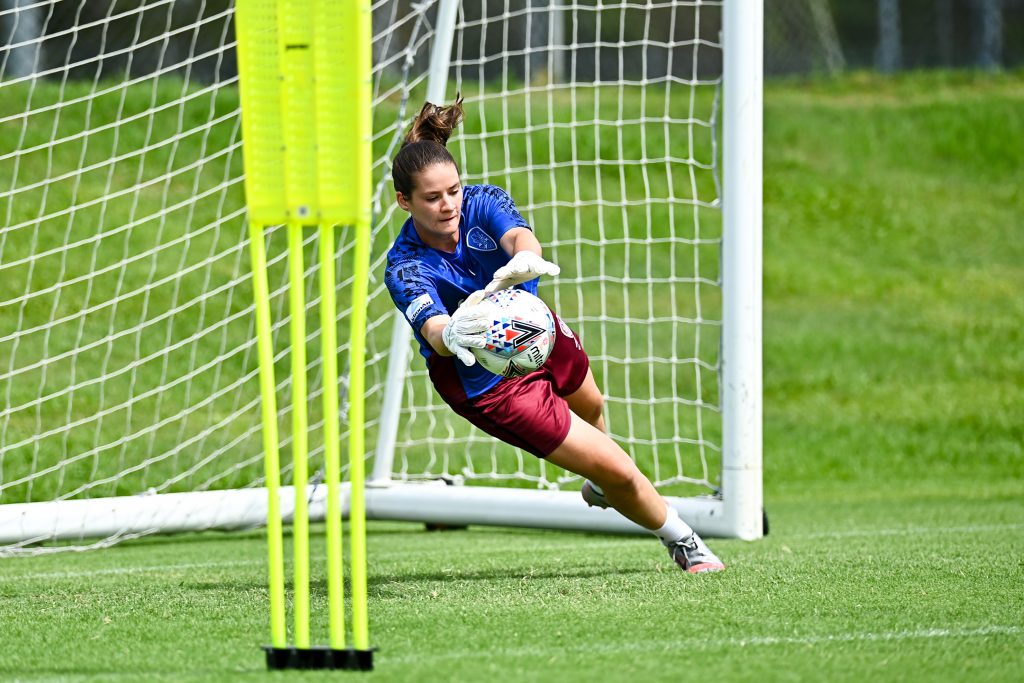 “It’s never enjoyable to be sitting on the sidelines for so long but it’s understandable being second to a Matildas goalkeeper.”

Getting her opportunity in the first round against reigning premiers and champions Melbourne City was a dream come true for Worth who finished with a clean sheet.

“I think moving forward its nice to score goals but what will get us through to the grand final will be clean sheets, so to start of with a clean sheet against a good side is always positive.”

The 23-year-old credited a lot of her success to the Brisbane Roar’s goalkeeping coach Brody Sams whose revolutionary training drills have grown Worth’s game to the next level.

“Every coach brings something different and Brody is really high energy and enthusiastic.

“A lot of goalkeeping coaches do quite traditional technique based training but its nice to be focusing on more realistic tactical scenarios which will translate better in games.”

Worth has been on the W-League radar for many years after previously representing the Young Matildas at the age of 17.

The young superstar said she benefited massively from the quality coaching staff and high performance environment that the Young Matildas system provided.

“I think that experience [Young Matildas] prepared me at a young age for this sort of environment now in the W-League.”

Worth signed a one year contract extension with the Brisbane outfit in November and said it was an easy decision for her to make.

“I’ve always wanted to be a player that stays at a club long-term… Brisbane is my home and the Roar is my club, so I didn’t have to think hard about it at all.”

When measuring the success of a sports club, titles tend to be the first point of reference - but what about winning on a...
Read more
A-League

After the AFL dashed the hopes of Tasmania having its own football team, Western United have stepped in to bring football to the state. AFL...
Read more

Brisbane Roar coach Warren Moon is adamant that scoring goals will not be a problem for his side against an in-form Perth Glory side...
Read more
A-League

The A-League must follow the path of other Australian sporting codes in adopting revolutionary new rules to make the game more interesting for fans. COVID-19...
Read more
A-League

Revealed: The A-League clubs with the most advantageous travel schedule

Reigning A-League champions Sydney FC and the relocated Wellington Phoenix have been blessed with the easiest travel schedules to start the 2020/21 season, while...
Read more
A-League

Warren Moon will be looking to freshen up the Brisbane Roar squad for their Valentine’s Day clash against a resurgent Newcastle Jets at Dolphin...
Read more