Revealed: The A-League clubs with the most advantageous travel schedule

Reigning A-League champions Sydney FC and the relocated Wellington Phoenix have been blessed with the easiest travel schedules to start the 2020/21 season, while Perth Glory were restricted from going home for two weeks.

The pandemic is still causing havoc with plenty of fixture changes and match relocations occurring, and questions have been raised about aspects like travel and how much of an impact it has had on each side.

Extensive travel is proven to impact an athletes physical and cognitive performance whether it be due to the change in routine, the unknown environment or travel-related stress factors.

It’s common for coaches to talk about the importance of preparation in delivering results, having to take a long trip or being stuck away from home would be inconvenient for any side.

The graph below identifies every team’s travel distance in kilometres based off the distance between home grounds to give a representation of which sides have been the most fortunate in the 2020/21 A-League season so far.

Sydney FC have taken the prize for the least amount of travel with a combined distance of approximately 210 kilometres from their first six matches which included four home games at Netstrata Jubilee Stadium.

The Sky Blues location in the centre of Sydney will keep this number relatively low as half of the A-League is based out of New South Wales this season.

Being based is New South Wales instead of Wellington has allowed the Phoenix to enjoy a relaxed opening to the season with their biggest commute so far being a trip to Central Coast Stadium at the end of January. 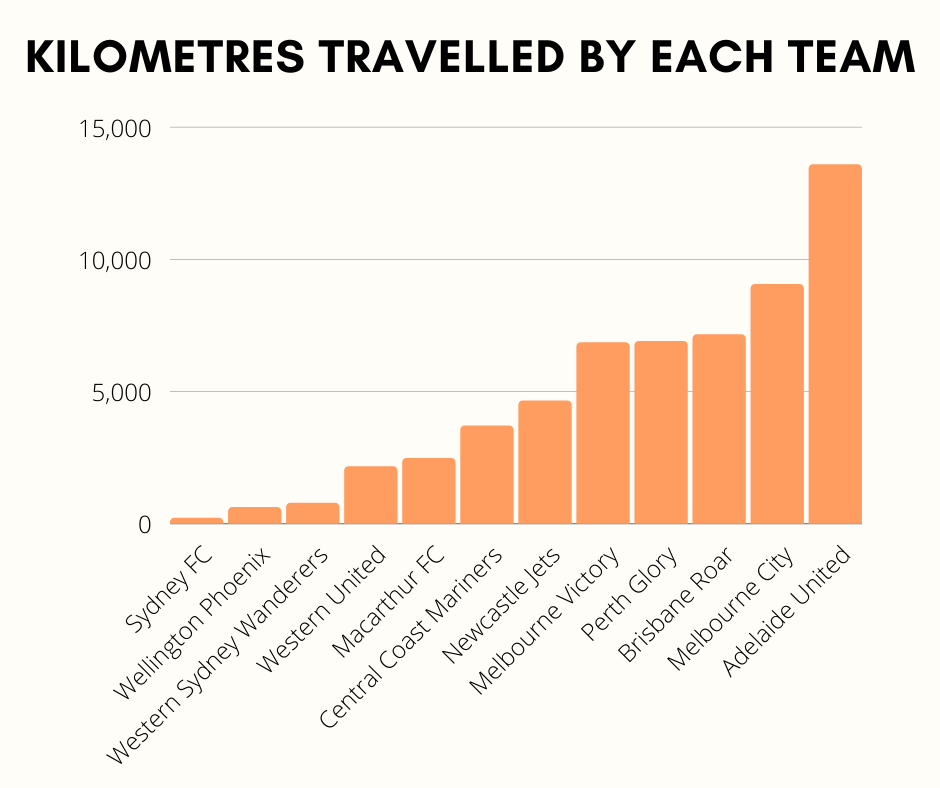 Graph: Total distance travelled for away games (from their home grounds).

It’s a completely different story for clubs outside of New South Wales as almost all of them have been disrupted at some point in recent weeks by border closures and restrictions.

Perth Glory are usually the most travelled side in the A-League but due to the Western Australia border closure, players and staff were unable to go back to Perth for two weeks which is the reason why they don’t have as many kilometres travelled as other teams.

In that time the Glory have played games in Victoria against Western United, Melbourne Victory and Melbourne City, and in South Australia against Adelaide United at Coopers Stadium.

Adelaide United have been the biggest travellers with away trips to almost every state in Australia including Queensland, New South Wales, Western Australia, and Victoria totalling approximately 13,578 kilometres in the space of eight weeks.

The Reds have struggled on the road and are yet to post a win in the A-League from four attempts away from home.

Despite having preliminary data at this stage, there is a clear trend that points towards New South Wales and more specifically Sydney teams having an advantage over the rest of the competition in regards to travel.

This trend has been seen in previous campaigns, however, the data this season does have some outliers due to circumstances surrounding the pandemic.

A new normal: The realities of COVID scheduling for Glory

Ahead of the distance derby this Sunday, Perth Glory looks to shake off their home loss to the Central Coast Mariners but not without...
Read more
Melbourne Victory W-League

Why the A-League must introduce domestic transfer fees

The banning of transfer fees between A-League clubs has created an ugly situation, where smaller clubs are often held ransom by contracted players seeking...
Read more

A new normal: The realities of COVID scheduling for Glory

Ahead of the distance derby this Sunday, Perth Glory looks to shake off their home loss to the Central Coast Mariners but not without...
Read more
Melbourne Victory W-League

Brisbane Roar coach Warren Moon is adamant that scoring goals will not be a problem for his side against an in-form Perth Glory side...
Read more
A-League

The A-League must follow the path of other Australian sporting codes in adopting revolutionary new rules to make the game more interesting for fans. COVID-19...
Read more
A-League

Warren Moon will be looking to freshen up the Brisbane Roar squad for their Valentine’s Day clash against a resurgent Newcastle Jets at Dolphin...
Read more
A-League

Macarthur FC have won their first game north of New South Wales after defeating the Brisbane Roar on a windy night in Redcliffe. Both sides...
Read more