Australian or international: where have our best A-League coaches come from?

Becoming a world-class league for the world to enjoy is no easy task. It requires the best scouting, best players and the best brains in the game.

The A-League prides itself on its ability to source from its own backyard and has expectations for anyone who tries to make a name for themselves in Australia or overseas.

With time and money on the line, the margin for error is slim and only the best will make it.

In the league this season, 10 out of the 12 head coaches are Australian. Whether they have been coaches in training for the majority of their career or been highly experienced A-League players themselves.

Despite our love for a homegrown hero, is this what our league needs? If the league wants to become known around the world, should we be looking elsewhere? 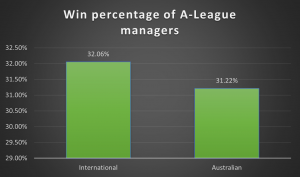 In looking at the win percentage of all the A-League’s previous and current coaches, the numbers show international coaches have had more success.

And surprisingly, out of the 79 managers to manage an A-League match, 39 of those were in fact from overseas.

The numbers may seem very close in favour of the international managers to grace our shores, but a number of these Australian coaches were only interm coaches during periods for failing clubs.

Former A-League club North Queensland Fury had two in the one season, both clocking up loses in their matches in charge.

But what may or may not come as a shock, out of the 15 seasons so far in the competition, 10 of the winning teams were lead by an Australian manager.

And out of those 10, two coaches, Kevin Muscat and Corica, were both A-League champions as players for their clubs.

International coaches have a higher winning percentage in the league and have been the most successful per game.

It could beg the question, are we giving international coaches enough time to build up our league or has it been our best building path possible all along.

United ready for the challenge ahead

Fletcher leading her side through the unknown