Whether it is a defence-splitting through ball or a lofted cross into the 18-yard box, passing is an art many football fans marvel over. Let us reveal each club’s best playmaker this season by the numbers.

To determine who has been each side’s best playmaker so far, four passing categories will be analysed. Key passes distributed, passing accuracy (%), completed crosses and assists provided.

Although Adelaide has had an inconsistent start to their campaign, Halloran has been reliable with the ball at his feet.

The Reds midfielder leads the team with 11 key passes, three successful crosses and has a 77.5 per cent passing success rate.

Considering how well he has distributed the ball, it comes as a surprise that Halloran only has one goal and an assist this season.

He will be hoping his strong passing game can help him increase his scoreboard impact in the coming weeks.

While this may seem like a huge surprise to many, Brown has been a catalyst in the Roar’s final third.

The full-back has completed a team-high nine crosses during the A-League 2020/21 season and has laid off 15 key passes.

Another statistic fans may be stunned by it as he is a defender, Brown has the second most assists in the league currently, with three to his name.

Even though he has excelled in most passing categories, Brown has a 73.7 per cent passing accuracy, lower than most of his teammates at Brisbane.

2021 has been nothing short of a fairytale for the league-leading Mariners.

Many players have contributed to their rise to the top, but De Silva is bringing an exceptional amount of flair to his side’s midfield.

The young midfielder leads the team with two assists and has struck 11 key passes over his eight league appearances.

While he has not completed a cross yet this season, De Silva has an outstanding 85.9 per cent passing accuracy.

Spanish maestro, Beñat has been one of the A-League’s signings of the season.

A key contributor to Macarthur’s success this season, Beñat has given off a team-leading three assists and 17 key passes across his first nine matches with the club.

Even though he only has one successful cross to his name, Beñat boasts a remarkable 88.8 per cent passing accuracy.

Although City has struggled to get off the mark this campaign, Noone has remained a constant threat in midfield.

The crafty veteran has completed 12 crosses, picked up one assist and laid off 14 key passes during the 2020/21 season.

Oddly enough, the only passing category Noone has not excelled in is his accuracy, which sits at a low 69.2 per cent.

Sitting at the bottom of the A-League table was not what the Victory envisioned when they began rebuilding over the summer.

Fortunately for the Big V, Brimmer has been an outstanding acquisition in an otherwise disappointing season.

The young midfielder leads the team with an exceptional 19 key passes and has an 82.1 per cent passing accuracy.

Like many of his teammates, Brimmer has not been able to register an assist this season but has completed two crosses in his seven league appearances. 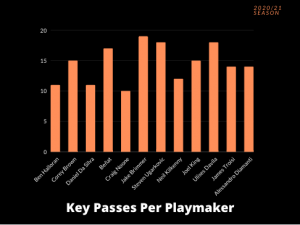 After a slow start to the year, the Jets have found some rhythm thanks to star players like Ugarkovic.

The playmaking midfielder has a league-leading 516 completed passes, going at a success rate of 87.6 per cent.

He has also tallied a team high 18 key passes, one assist and three successful crosses.

Ugarkovic is evolving into one of the league’s best midfielders and could be a PFA Team of the Season candidate if he continues his stellar form.

Perth has been remarkable in front of goals this season, scoring 15 goals in five games.

Many of those goals have been scored as a result of Kilkenny’s passing ability.

Kilkenny has the most assists in the A-League with five and unleashed 12 key passes during his five starts.

Along with these outstanding statistics, the Glory midfielder has an 82.5 per cent passing accuracy.

Although he is averaging an assist per game, Kilkenny has only completed one cross this summer.

While it may come as a shock to see another fullback make this list, King is not just any fullback.

At 20, King has developed into one of Australia’s top prospects, leading the Sky Blues in many passing categories.

King has made a team high 16 key passes and six successful crosses this season.

The emerging superstar also has a reliable 80.1 per cent passing accuracy and an assist to his name.

Davila is one of the A-League’s finest international stars. He made the PFA Team of the Season last year and seems set to challenge for a spot in the side once again.

The clinical midfielder has a team-leading 18 key passes and possesses a 79.9 per cent passing accuracy over his seven appearances.

While he has done well in most passing categories, Davila has only managed to complete one cross and has not registered an assist yet.

The Wanderers signed some excellent players in the offseason, but Troisi may be the best of them.

He is making a large contribution during his first stint with Wanderers, leading the team with 14 key passes.

Troisi has completed four crosses and 79.3 per cent of his passes have been successful too.

He only has one assist to his name, but his passing has created many openings for his teammates.

The Reigning Johnny Warren Medalist is always dangerous with the ball at his feet.

Diamanti leads Western with three assists this season and has completed six crosses.

Western United’s star midfielder has also given off a team high 14 key passes.

The only passing category Diamanti is not dominating is passing accuracy. Currently, he has a below-average 74.1 per cent success rate.

Amir Daou
Bachelor of Sport, Health and Physical Activity and Bachelor of Media and Communications student at Flinders University. Writing intern covering the latest in Adelaide United news and matches. Sport is my passion and I'm excited to learn more about the industry during my time with The Football Sack.

Why Adelaide United will win the A-League