Most international players to represent in the A-League

The A-league may not be the biggest league in the world but it sure can attract players from all over the world.

It’s no surprise the diversity in football leagues around the globe, after all it’s called the world game.

We will take a look at the most overseas players to represent their countries in the A-League and how many games and goals they have contributed.

83 nations have so far represented in the A-League, but most of them have only had a few players participate. So, we are going to look at the 11 nations that have surpassed 10 players. 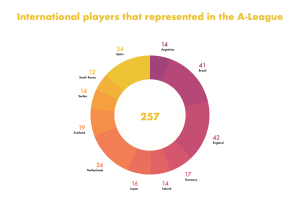 Among the group are seven nations from Europe, two from South America and two from Asia.

England is ahead with 42 players and Brazil is not far behind with 41. Only four nations have been able to have 30 or more players participate in the league (England, Brazil, Spain and the Netherlands).

South Korea has the least amount in the group with 12 players.

However, the numbers and rankings are slightly different when looking at how many games played and goals scored. 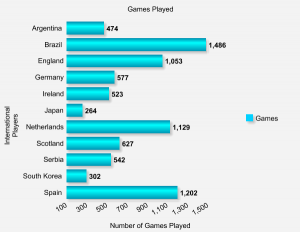 Having the most players in the league does not necessarily mean it’s going to guarantee game time.

England is in the lead with the number of players but is coming in fourth when it comes to games being played in the A-League.

This also applies to Japan who have 16 players but are lower than South Korea (12) and significantly lower than Serbia (14) and Ireland (14).

Brazil has played the most games with 1,486 and second place Spain are near 300 games behind them.

*This excludes figures from pre-season games 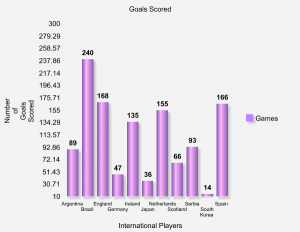 Brazil, England, Spain and the Netherlands are the top four nations with the most goals scored in the league. However, coming in hot in fifth place are Ireland with 135 goals which is impressive, considering they have 28 fewer players than England (42).

Serbia is also doing well having scored 93 goals with 14 players.

Only a total of 40 goals were scored in the finals.

*This excludes figures from pre-season games 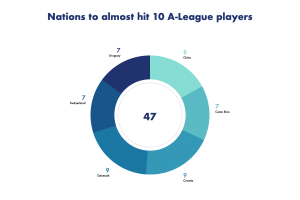 Six nations are currently on the run to almost getting 10 players to represent in the A-League.

So far, Croatia and Denmark are one player away from making it 10. There is currently one nation that has 10 and that is Italy.

It is uplifting to see players worldwide are willing to come to Australia and part-take in the A-League.

As time goes on we will begin to see these numbers increase and the more players come in, the more the game grows.

Take a look inside the Indigenous stars of Australian football

Why Macarthur FC will win the A-League

If A-League teams were gaming consoles