Which A-League club gives their under 23s the most game time?

There has been a lot of talk this season about being the year of opportunity for youth players, so let us see which clubs are giving the most game time to their under 23s.

Youngsters seem to be taking the A-League by storm and making headlines each and every week, whether it is Alou Kuol toping the scoring charts or the Toure brothers lighting it up in Adelaide, youngsters are everywhere.

This begins to raise the question of which clubs are giving these youngsters the chance to shine, in order to answer this question, we will need to find the percentage of time played by under 23s in their club games.

All data is sourced from Wyscout.

Western sit right at the bottom when it comes to giving playing time to their youngsters with only 15.8% of total minutes played this season having been played by their under 23 players. Ivan Vujica is the standout youngster for United with Dylan Pierias and Lachlan Wales getting some game time too.

The reigning champions are also very low on this list, preferring to give minutes to their more experienced players.

Joel King is the exception to this idea, with Trent Buhagiar also getting some decent minutes up front.

A-League newcomers Macarthur are quite low but seem to be using their youth players as impact substitutions.

Denis Genreau has been a constant presence in the Macarthur side and has been very impressive.

The struggling Victory are similar to Macarthur in that they are using their younger players to come off the bench or fill in when an injury occurs.

Jake Brimmer has been a highlight in a poor start to Victory’s season.

This is the point where clubs start having multiple youngsters as first team players, for the Phoenix they have Joshua Laws, James McGarry and Cameron Devlin all getting decent minutes.

City are well known for their impressive youth development and it looks like the next batch is ready to step up.

Tom Glover, Connor Metcalfe are first team stalwarts at this point and there are plenty of young players on the bench that are getting some decent minutes in the squad.

Warren Moon has put a lot of trust in his youth players and it appears to be paying off so far.

Dylan Wenzel-Halls remains in the hunt for the golden boot, Japanese import Riku Danzaki has been a revelation in the midfield alongside fellow youngster Rahmat Akbari.

The cash strapped Jets were almost forced to play their youth as they could not afford anyone else, and it appears to be paying off as they begin to rally from a poor start to the season.

Angus Thurgate has been a mainstay in the midfield while Connor O’Toole and Johnny Koutroumbis have been integral to the Jets defence. The Jets have also been able to utilize Ramy Najjarine (on loan from City) to great effect in the front third.

The Glory have had Dane Ingham play almost every minute this season and have given a lot of minutes to almost all of their under 23 players.

With Carlo Armiento and Nick D’Agostino proving great contributors to the Glory’s strong start to the season.

The Mariner’s youngsters have made quite the impact this season, Alou Kuol has been a crucial impact sub for Alen Stajcic while Kye Rowles and Gianni Stensness have been defensive giants.

There has also been the resurgence of Danny De Silva, who may finally be living up to the potential everyone knows he has.

The Wanderers have three key youngsters in their starting squad, Daniel Margush in goals, Tate Russell in defence and Keanu Baccus shielding the defensive line from the midfield.

These youngsters are backed up by Mark Natta, Thomas Aquilina and Tass Mourdoukoutas who have all played an impressive number of minutes.

It’s safe to say Adelaide blow every other club away when it comes to giving time to their youngsters.

James Delianov has locked his spot as number one goalkeeper, Louis D’Arrigo continues to run the midfield with Joe Caletti, Noah Smith has been a constant presence in defence.

Then you look at the players making an impact from the bench, they include the Toure brothers, Yaya Dukuly, Yared Abetew and Pacifique Niyongabire. This may be a rough season for Adelaide but the experience their youngsters earn could be crucial to future campaigns. 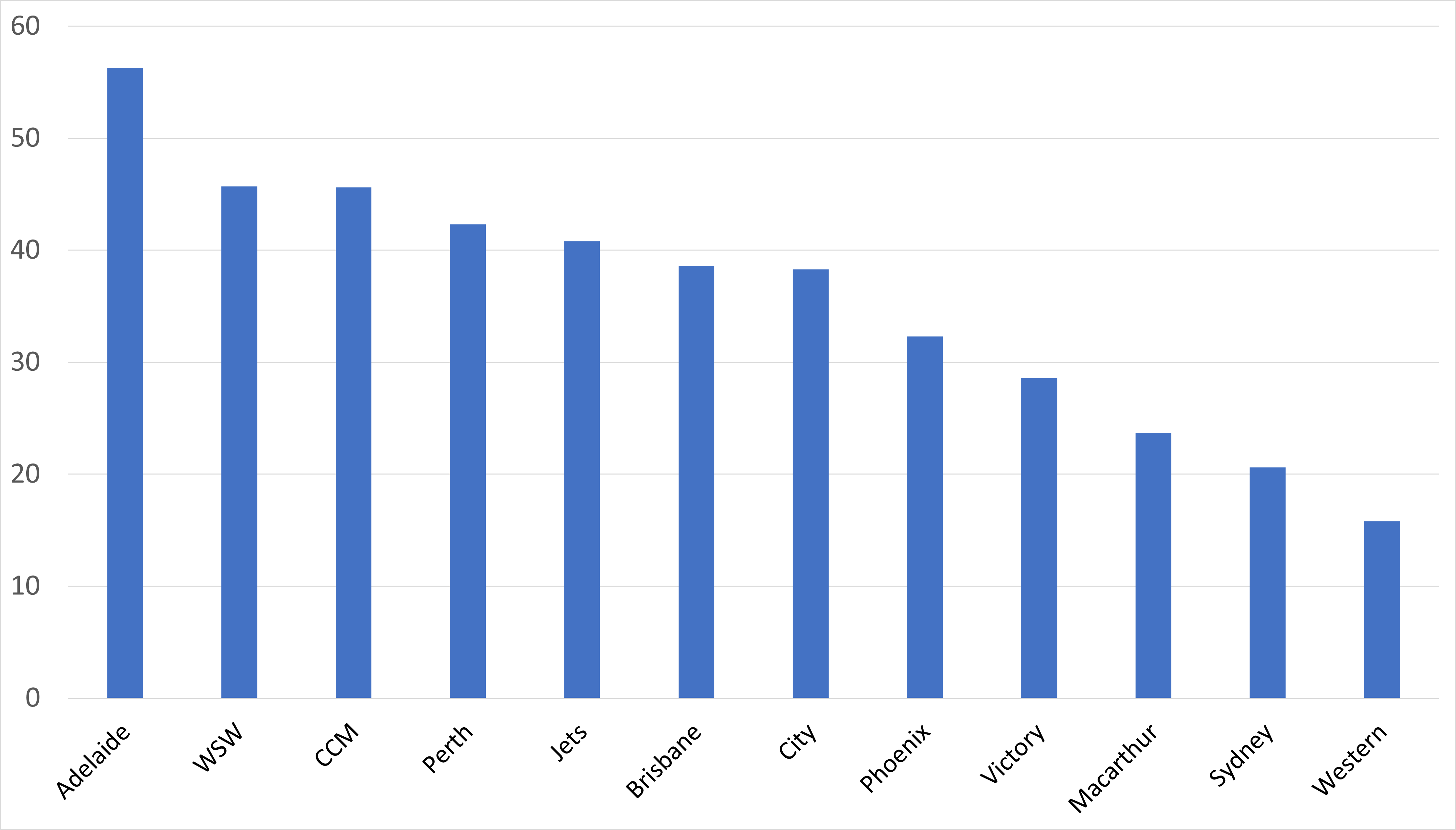 Ben Johnston
I grew up on the Central Coast and fell in love with football in 2005. Supporter of Mariners, Manchester United and Macclesfield Town.

Having just passed the halfway mark for the 2020/21 A-League season, The Football Sack takes a look at the performance of the Central Coast...
Read more
A-League

Alen Stajcic: “We are the benchmark”

Alen Stajcic believes his Central Coast Mariners are the benchmark team in the A-League after they won their top of the table clash with...
Read more
A-League

The 5 substitution rule needs to stay

The five substitution rule has been around for almost a year now and here is hoping it is around for a lot longer. The new...
Read more
Love your football?
Subscribe to our weekly football wrap. During the season we'll send you all the week's football action straight to your inbox.