Marquees not only have to live up to their names, but the money spent on them too.

It’s no surprise that there’s double the amount of pressure for them to perform to a standard that could change their respective club’s prospects of winning.

Australian shores have welcomed a plethora of top players that, indeed, were accompanied by a massive contract. Some might consider marquee signings as trump cards, to be used as tools for undoubted success. Unfortunately, this is not always the case.

In all competitions, Ono scored 11 goals in 57 appearances, helping Western Sydney to consecutive A-League Men grand finals. The playmaker also performed an integral part in the squad’s initial path to the AFC Champions League quarter-finals. It’s safe to say that Shinji Ono helped pave the way for the Wanderers in their introductory seasons and his absence has shifted their performance.

The Belgian fullback spent his final year contracted to Aston Villa as a loan for Melbourne City. In the Melbourne Derby, De Laet scored on debut to a crowd of 40,504.

After playing defence for several months, De Laet was used as a striker. This decision proved to be fruitful after he led Melbourne City to a 4-3 victory over Western Sydney Wanderers with two of those goals being his. De Laet’s first goal in this contest established a new club record of 30 seconds for the fastest ever goal in the A-League Men.

Although short-lived, De Laet’s career with Melbourne City was nothing short of successful. 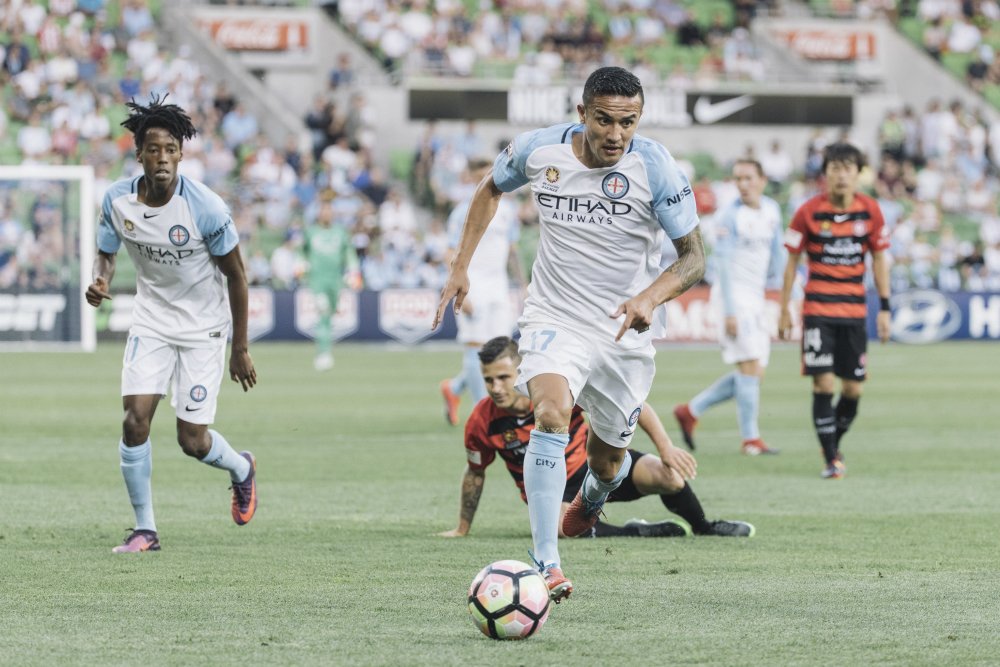 Considered to be one of the best Australian football players of all time, Tim Cahill joined Melbourne City in August 2016 and helped the club win their first piece of domestic silverware, scoring the sole goal in the 2016 FFA Cup Final win over Sydney FC.

Contentiously, the striker’s most unforgettable City moment came in his debut in the Melbourne Derby, netting an astonishing 35-metre strike against Melbourne Victory. During his time in the A-League Men, Cahill, scored a total of 13 goals for City since his prominent signing. Cahill’s performances lacked very little and proved to be value for money.

After a superstar start to his first season scoring his first A-League Men goal in a 3–2 away success against Sydney FC. In his first five starts, Heskey brought his goal tally up to five, which held him to joint best scorer of the league.

Having completed 2012/13 with nine goals in 23 appearances and warranting candidacy for the Newcastle Jets’ Player of the Year award, Heskey renewed his contract for the next season. This is where things started to go downhill for the English international. After managing only one goal in 19 appearances in 2013/14, he returned to his homeland. It’s a shame he couldn’t maintain the form he demonstrated in his first season.

With marquee addition Keisuke Honda, Melbourne Victory were anticipated to perform heartily in both the A-League Men and Asia.

Honda himself missed a hefty portion of games due to a hamstring injury but did net seven goals and accumulate seven assists across his 20 A-League Men appearances.

Unfortunately, his injuries caused him to have little to no impact on the overall success of Victory.

Two of the latest high-profile players that have signed up for this season’s A-League Men season are Englishmen Rodwell and Sturridge.

We’re only two rounds in, so we haven’t seen much from these players yet. However, they are the ones to watch and it will be interesting to see if they can live up to their names.

Paloma Darjani
Covering the Western Sydney Wanderers for the 2021/22 season. Studying a Bachelor of Media and Communications at the University of Sydney.

Overlooked players prove their worth in Wanderers win

Wanderers down Victory to make it 2 from 4 under Rudan

Canberra gets winless monkey off their back