It has been a season to forget for Canberra United, with last year’s semi-finalists still winless after eight matches but there has been a glimmer of hope in the darkness.

Whilst there has been moments of magic including late comebacks against Brisbane Roar and Perth Glory, it has felt like even those feats have been over shadowed by their lack of victories.

It has gotten to the stage where a loss to newcomers Wellington Phoenix on Friday would see them drop to equal last with just a handful of games remaining.

Whilst this season will likely go down as a disappointing one, on Saturday evening there was a glimmer of hope for the future of the club, which came as a result of another goalkeeping injury.

Her name is Chloe Lincoln. 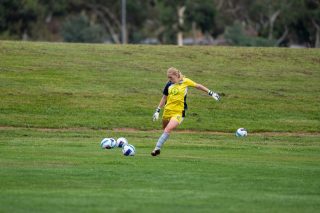 Just over a month ago the 17-year-old goalkeeper was not even in the playing squad, rather she was a scholarship player.

The third-choice keeper had come off a brilliant season for the Academy side in the ACT NPLW, seen as a prospect who would get her opportunity in the years to come.

After an injury to backup keeper Beth Mason-Jones in the warmup of their Christmas miracle match against Brisbane, she was rushed onto the bench.

At the time it was thought that just being on the card once may have been the extent of her first A-League Women’s season.

In early January when Mason-Jones departed the club it all changed for the young shot stopper.

Lincoln was officially elevated from her scholarship to the official roster.

Fast forward a month to Saturday against Perth and an all too familiar sight occurred, a Canberra keeper injuring themselves.

Despite attempting to play on for half an hour after the initial injury, Keeley Richards would be forced off with her knee in too poor a shape to continue on.

Just two months ago Lincoln was the third choice, on Saturday she became an A-League Women’s debutant.

For the 17-year-old, making her debut in front of a packed home crowd was a dream come true, with the goalkeeper keeping a clean sheet in her 20 minutes of game time.

“I have no words, I have literally lost my voice,” she said.

“I loved every minute of it.”

It was not an easy moment to enter the match either, with Canberra trailing 3-1 when she was substituted on.

Wind the clock forward twenty minutes and the Academy player was making a diving save in the dying seconds to ensure her side would at least get something out of the fixture.

Whilst Lincoln has had many coaches along the way, she credits Canberra goalkeeping coach Chantel Jones and also Richards herself for numerous parts of the performance, including that crucial save to keep the match tied at 3-3.

“We have actually been working on that save in training, so it was pretty good,” she said.

“They are the most amazing people; I have been so lucky. They are just legends, I don’t know how else to put it.”

Whilst head coach Vicki Linton was not thinking that she would need to use Lincoln at the beginning of the season, she was always confident that the youngster could get the job done.

“Chloe just came on and made it look easy, she is a very talented young professional,” the head coach said.

“It’s great to give her that opportunity and just see her do so well. She passed with flying colours.”

Whilst Lincoln thoroughly enjoyed the experience, she will be prepared to do whatever the team needs her to do for the rest of the season.

“You always want to play, but I’m happy to play on the bench,” she said.

“Whatever the team needs I’m ready to do.” 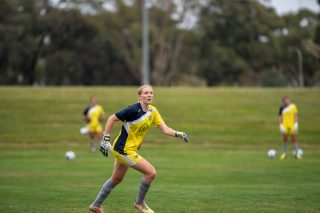 It remains unknown whether Richards’ injury is long term, that news will likely become available in the coming days.

What Lincoln did prove on Saturday evening is if Richards is unfortunately ruled out for an extended period of time, she is more than capable of filling her shoes.

Canberra have found themselves a keeper for the future, and whilst this year has not been what they wanted in terms of results, there is at least this shining light.

As they say, remember the name Chloe Lincoln.

Football book review: Be My Guest, Football Superstars in Australia