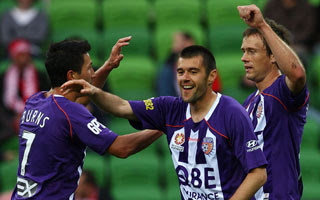 A controversial injury time penalty converted by Robbie Fowler gave Perth Glory a share of the spoils in their clash with Melbourne Heart at AAMI Park.

There looked to be little contact between Glory substitute Michael Baird and Heart defender Kliment Taseski in the area as the game headed into injury time but referee Kurt Ams pointed to the spot and Fowler sent Clint Bolton the wrong way from twelve yards.

Melbourne twice led in the game but are still left searching for their first A-League win. They gave a debut to 17 year old defender Brendan Hamill with Michael Beauchamp absent while Josip Skoko is sidelined through injury.

The visitors meanwhile paired Josh Mitchell with Jamie Coyne at the back with Jamie Harnwell on the sidelines and Andy Todd pulling out yesterday with a virus.

The hosts signalled their intent early on when captain Simon Colosimo played a neat through ball to striker Alex Terra but he was denied by an excellent save from Tando Velaphi.

Glory failed to heed that early warning as again Brazilian Terra was played in behind the defence and this time it was Naum Sekulovski who halted his progress, giving away a penalty in the process.

Former Ajax Amsterdam and Sheffield Wednesday striker Gerald Sibon stepped up to convert past Velaphi for a lead inside five minutes.

Within a quarter of an hour however the sides were level. A delightful inswinging cross by Robbie Fowler nicked the head of Hamill and hit teammate Michael Marrone before trickling over the line for a bizarre own goal.

Heart retook the lead on 36 minutes. A needless foul by Todd Howarth allowed Dean Heffernan the opportunity to put in a dangerous free kick, and when Coyne’s header dropped to Nick Kalmar, he made no mistake with a neat finish into the bottom right corner of the net.

Perth started the second half in the ascendency and Branko Jelic headed over from Steve McGarry’s cross.

Fowler was then denied by a stunning save from Bolton as Glory began to turn the screw and much of the second half was played in and around Heart’s area.

However, Melbourne looked set to send the majority of the 5,878 spectators home happy until a final twist in the saga in injury time.

Michael Baird, who only received international clearance to play this week, went down very easily under the challenge of Taseski and Fowler’s first goal in Glory purple denied Heart the win.