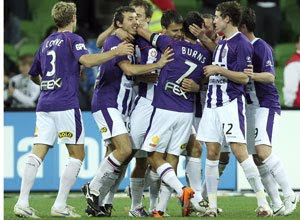 Perth Glory have made a superb start to the 2010 Hyundai A-League season and head the table on seven points with two wins and a draw from their opening three games.

A record crowd of over 16,000 were at nib Stadium for the season opener against North Queensland Fury, in large part due to the hype surrounding the debut of marquee star Robbie Fowler. The Fury somewhat spoiled the party that night, netting a last minute equaliser in a 3-3 draw, but the fans came back for last week’s second home game against Newcastle. That crowd of 12,031 was higher than any Glory managed last year, and shows the potential in Perth for a successful A-League team.

The addition of Fowler, a household name worldwide, is seen as a massive boast for football in Western Australia, and coach Dave Mitchell has heaped praise on the new recruit.

“He’s a fantastic character in that dressing room,” said Mitchell. “He’s a cheeky bugger and he’ll try and get other people in trouble you know, he’s a bag of mischief. But the work he’s doing is selfless.”

“People look at him to score goals but he’s taking corners, he’s taking free kicks, so it’s not all about him scoring goals, he’ll create chances for other people. It’s not about how many goals Robbie Fowler’s going to score for Perth Glory this year.”

A first A-League win in Melbourne over the Victory in round two shows how much Glory have come on in the past twelve months when previously they were almost guaranteed to return home from a road trip empty handed.

The side isn’t too different from the one which played finals last year, losing out to the Wellington Phoenix in a penalty shootout. Fowler is the obvious new face, while Josh Mitchell and Michael Baird joined from Romanian side Universitatea Craiova but both have had Glory careers stalled by international clearance issues.

Andy Todd, the ex-Premier League defender who was one of the start of 2009, has been absent through injury but has hardly been missed thanks to the fine form of veteran club hero Jamie Harnwell. The 33 year old found the back of the net against Victory and has formed a good partnership with Jamie Coyne who is standing in for brother Chris at the heart of the back four.

Perth’s real strength so far this season has been their right side. Youngster Scott Neville and winger Adriano Pellegrino have both been in sparkling form and have been the catalysts for a number of goals so far (Neville scored in the opening game of the season while Pellegrino has three assists to his name).

Next up is a game against the newly formed Melbourne Heart at AAMI Stadium on Sunday, and a second win in the Victorian capital so early in the season will not only prove that the win over Victory was no fluke, but also send out an early statement of intent to the rest of the league.