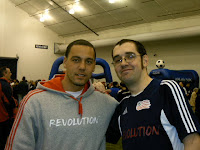 Introducing The Football Sack’s ‘Adopted Club’ from the United States of America. Followed by our favourite North American, Jim Powers of Boston (pictured right with former Rev Daniel Hernandez), New England Revolution is being announced as the American club for all followers of ‘The Sack’!

Here you will find a short history compiled by Jim, including club legends, rivals and why he follows ‘The Revs’. There’s even a coincidental link between ‘The Revs’ and our other adopted club ‘The Shels’. And remember, if you have a club you feel we could adopt, or just support a local club in Australia, click here and let us know about it!

England Revolution were founded in 1995 when the US Soccer Federation lived up to the promise they made to FIFA in order to secure World Cup ’94 and helped to start a true top-flight soccer league in America. The “Revs” became charter members of Major League Soccer, playing in the Eastern Conference. Robert Kraft, owner of the NFL’s New England Patriots, and his son Jonathan became the “investor/operators” of the team under MLS’s single entity structure (where the league owns the majority share of the teams). The Revs are the only team to have all their league games broadcast on TV.

The name “Revolution” and the red/white/blue color scheme stem from New England’s place in American history as the birthplace of the American Revolution. The team has played in suburban Foxborough, Massachusetts for its entire existence, ground-sharing with the Patriots. They played at the old Foxboro Stadium from 1996 until 2001, when that facility was torn down to make way for the state-of-the-art Gillette Stadium in 2002. Recently the Krafts have begun to investigate moving the Revs into a soccer-specific stadium closer to the Boston metro area (Foxborough is some 20 miles away from Boston), as more and more MLS teams play in their own purpose-built facilities.

The Revs are basically the hard-luck team of MLS, having lost four MLS Cup finals (2002, 2005, 2006, 2007) and one US Open Cup final (2001). In 2007 they managed to bring home their first piece of silverware, defeating FC Dallas to win the US Open Cup (the oldest soccer cup competition in the USA, dating to 1912) by a 3-1 score in 2007. The following season they became the first American team to win the SuperLiga, a competition pitting MLS teams versus those from Mexico. The Revs have struggled in the CONCACAF Champions League (and the predecessor tournament, the Champions Cup), getting knocked out in 2003 and 2006 in the first round and in the prelims in 2008.

The team is supported by four organized groups. The oldest of these are The Midnight Riders and Rev Army, both founded the same year as the team. The last two years have seen the emergence of The Rebellion and La Barra Latina Revolucion. The north end of the stadium is known as “The Fort,” a section for the supporter’s groups and any fan who wants to stand and sing for a full 90 minutes.

This hasn’t exactly been our year for a few reasons. The departures of talent like Clint Dempsey (to Fulham, 2006), Andy Dorman (to St. Mirren, 2007), and Michel Parkhurst (to Nordsjælland, 2008) and the team’s failure to adequately replace them have left the Revs a pale shadow of the team that stormed to MLS Cup 2007. Talismanic striker Taylor Twellman (the leading scorer in team history with 101 goals) has been out for the better part of two years now with a head injury he suffered in 2008 and the other strikers have struggled to replace his production. Former FC Porto and Hearts striker Edgaras Jankauskas, brought in last year to help score some goals, has also been injured for a large part of his time here. Midfielder Shalrie Joseph, easily the best at his position in the league, missed significant time due to a drug suspension (marijuana use). Stalwart goalkeeper Matt Reis, statistically the best ‘keeper in team history, was out for the first months of the season after off-season abdominal surgery. Midfielder Joseph Niouky, signed from Senegal’s Port Autonome, has proven unable to compete on an MLS level.

However Marko Perović, signed from FC Basel, and draft pick Zack Schilawski have shown to be able hands. The team, currently near the bottom of the East, defeated the league leaders (and historic rivals) LA Galaxy by a 2-0 score on July 10th. The Revs have also been ripping through this year’s SuperLiga, winning all their games and advancing to the final (to be held August 23rd).

Considering the team’s short history there aren’t many, but we’ve got a few. Joe-Max Moore would have to top my list. Moore played between 1996-1999 and returned for a second stint after leaving Everton from 2003-2004. At the time of his retirement he was the team’s all-time leading scorer. Moore was also a fixture for the US National Team between 1992 and 2002. Italian goalkeeper Walter Zenga finished his career in New England (1997-1999) and became as famous for his antics as for his superb goalkeeping. He once celebrated a goal by running to the sidelines to kiss his girlfriend, while leaving the net wide open. He barely made it back to make the save. Black Revs hats with his #1 in a spider web are still worn by long-time Revs fans. Midfielder Steve Ralston just retired this year after eight productive seasons with the team. He was known as the iron man of MLS because he holds the league records for starts (372), minutes played (33,143), and appearances (378). He also holds the overall all-time United States professional soccer record for appearances (412) as well as the MLS record for assists (135).

As far as current favorites go the aforementioned Taylor Twellman, Shalrie Joseph, and Matt Reis are well-loved by the fans. Our head coach Steve Nicol, already a Liverpool legend as a player, has long been considered one of the best coaches in the league.

The Revs have a few. The New York Red Bulls (formerly MetroStars) are the closest to us. The first Revs game ever was against them. The rivalry, however, is based more in the traditional Boston vs. New York sports rivalry (Boston Red Sox vs. New York Yankees, for example) than it is based in any on-the-field reasons. New York has been, frankly, awful for much of its existence. Much more animosity is reserved for DC United and the Chicago Fire, who we have had some epic playoffs battles with in the past. More recently the LA Galaxy and Houston Dynamo have become our rivals based on face-offs in cup finals. LA defeated us in the 2002 and 2005 MLS Cups as well as the 2001 US Open Cup. Houston beat us twice in the 2006 and 2007 MLS Cups. Older Revs fans have no love for the Columbus Crew, a feeling stemming from them denying us our first trip to the playoffs in the late 1990s.

WHY I SUPPORT THE REVS (AND YOU SHOULD TOO)

You’re not going to find any more ardent fans in MLS than us. There are no glory hunters, no fair-weather fans. If you see someone in a Revs jersey they can spout off every fact and statistic about the team that exists. We’re sort of red-headed stepchildren seeing as our owner is more of an NFL guy than a soccer guy, we get very little respect from the Boston sports media (and other Boston sports fans), and this has led to an all-for-one, one-for-all mentality among the fans. Win or lose, we’re going to have fun in the post-game tailgate. If this proposed Boston-area soccer stadium comes to fruition, we would immediately become one of the biggest teams in MLS. There’s some hope for the future, and failing that- well the beers are always cold. C’mon you Revs! 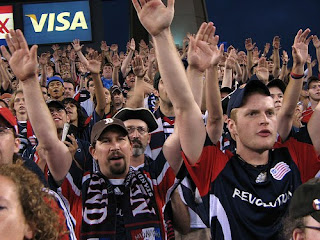 P.S. there is a link between TFS Adopted Club Shelbourne FC and the Revs. Midfielder Richie Baker, a long-time Shels player, spent the 2004 season playing for us before returning to Ireland after failing to find a regular place in the side.