TFS Team of the Week: Round Four

August 30, 2010
In a strange turn in regards to Teams of the Week, due to some very close voting and players playing in multiple positions The Football Sack has gone with a 4-3-3 this week. 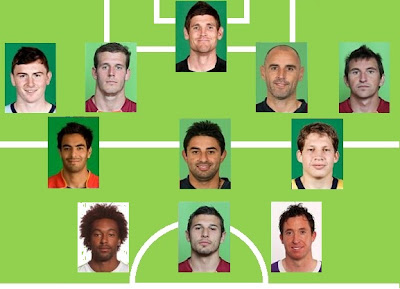 It’s another example this week of the unit working together to make individuals look good, with three of the four players in the backline all being involved in a team clean sheet. Shane Stefanutto makes an early claim for TFS Player of the Season by his second appearance in our side, with teammate Luke DeVere joining him in a sign that the Roar’s three successive clean sheets to open the season are no fluke. Meanwhile the old enemies Kevin Muscat and Sebastian Ryall both make their first of most likely many appearances.

In what one hopes won’t become tradition, we yet again have a sent-off player in the Team of the Week in Liam Reddy. Until his controversial sending-off, Reddy was solid without being spectacular, never particularly tested but doing the basics correct. There was fierce competition from Clint Bolton to be in his place after quite a spectacular performance from the former Sydney FC Custodian, but after voting, he was pipped at the post. Funnily enough the perpetrator of Reddy’s demise has also made the team! Patricio Perez, making his A-League debut showed skill, vision and cunning to salvage a draw for his new side. Although possibly bending the laws, his making of the team shows that results do matter, although his undoubted flair naturally helped with his selection.

To wrap up the midfield is Carlos Hernandez, who made a return to the form that we all love and expect from him in a powerful display against a shaky Gold Coast United side, and also Marcos Flores – making some telling runs, brilliant touches and basically ripping through the Fury defence at ease.

This week’s frontline consists of players who can play in both a centre forward slash striker role as well as a more creative midfield position. Two of the players, in Robbie Fowler and Kosta Barbarouses both opened their accounts with their new clubs and after both had spurned decent opportunities in previous weeks, and in a record for TFS Team of the Week, Isaka Cernak becomes the first player to make the side after being part of a losing side on the weekend.

Let us know what you think by adding a comment below, and tune in to the TFS Podcast for more detailed analysis and humour as bad as Mitch Nichols’ footballing ability (podcast can be found here)