A glorious afternoon greeted 10,000 fans at Moore Park Road for the Round Eight Hyundai A-League clash between Sydney FC and Gold Coast United. 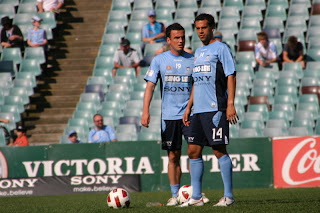 Sydney FC welcomed back Captain Terry McFlynn and Sydney talisman Alex Brosque to partner Brazilian Bruno Cazarine up front for the first time with Mark Bridge in behind in a 4-4-2 with a midfield diamond.

Bruce Djite and Andrew Barisic were paired with Jason Culina at number 10 as the Gold Coast opted for an attacking 4-3-3.

Sydney faced their first game of a three matches in eight day stretch and came out up-tempo with Sydney FC coach Viteszlav Lavicka animated on the sidelines from the opening whistle.

Brosque’s injection of pace and positioning provided the perfect antidote to the flat and at times a bit predictable looking Sky Blues of recent weeks supplying direction to attacking raids from the outset.

Sydney retained good possession early as they set about putting pay to their atrocious league position at the foot of the Hyundai A-League ladder. Only a few untidy passes by Scott Jamieson and Stephan Keller in particular saw Sydney undo some of the pressure they had built up.

On 9 minutes Sydney had their first clear chance when an uninspiring and well hoisted long ball from Scott Jamieson resulted in Bruno Cazarine heading on to Brosque who, quick to the opening, made an incisive run between Michael Thwaite and Kristian Rees. Brosque forced a good save from an advancing Gold Coast custodian, Glen Moss.

Gold Coast United came into the match with three clean sheets in a row but that didn’t look like lasting long when in the 18th minute Sydney formed a raid through Stuart Musialik. Musialik released Alex Brosque who played a through ball to Bruno Cazarine who had found space behind Thwaite. However the ball was heavy and a good chance went begging.

Gold Coast indeed went behind as the game approached the 20 minute mark when a Byun corner was flicked on by Brosque to Cazarine who powered a header at goal which Adama Traore could only parry in. Cazarine had his first home goal in front the Sydney faithful and took off in celebration after some brief moments of uncertainty whether the ball had crossed the line.

The Cove, bathed in full sunlight began to sing Ode To Joy as Sydney looked more the defending Hyundai A-League Premiers and Champions they are.

A well worked short corner by Jason Culina and Ivorian Adama Traore soon had Sydney in trouble as the ball made its way to the head of Dino Djulbic which the big United Central defender headed only marginally wide of Liam Reddy’s right post.

Sydney though stepped up their game, determined to make amends with their fans. On 30 minutes some good play from Musialik allowed Sydney to link up well in midfield before Brosque and Cazarine showed again that their combination was beginning to gel. Brosque duly created room for a shot which slid wide of the Glen Moss’ left post who was at full stretch.

On 38 minutes after some good play by Gold Coast United in midfield, Sydney regained possession through Shannon Cole who hoisted a ball high and central. Kristian Rees did not deal with the ball well and it fell to Bridge in space. Bridge held the ball up for an advancing Brosque who found also space in behind a United defence which had lost its shape but his shot narrowly missed the top corner.

Sydney would rue the chance missed as the Gold Coast worked their way back into the match as the game approached the interval. Captain Culina swung in a corner from the Paddington end as Sydney FC fans berated him at the corner flag. Thwaite knocked it down expertly for Bruce Djite who opened his accounted for his new club with a sweetly taken diving header which nestled the goal nicely.

1-1 and Sydney had gone to sleep before half time. Culina knew it and as the United players wheeled around to celebrate, he returned serve to Sydney FC fans, kissing his badge in the direction of the taunts.

Sydney continued to enjoy a healthy amount of possession as the second half commenced. Jason Culina though soon got to work on the right hand side with Steve Fitzsimmons. A few trademark Culina step overs released Fitzsimmons who returned the pass and took off down the sideline losing his marker. Culina played it through first time to the now open Fitzsimmons who nutmegged Byun and got in behind. The resulting cross made Sydney scramble but Ryall was equal to the task and cleared.

As the game hit the hour mark a quickly taken free kick released Mark Bridge in space at the top of the box. Bridge flicked it in to other ‘Killer B’ Alex Brosque who got clear of Dino Djulbic. A trip on Bruno Cazarine who, it should be pointed out, had no part in the build up resulted in a free kick being awarded by match official Ben Williams. Williams, who was could not be called whistle shy for the duration of the match, effectively disallowed Alex Brosque’s resulting goal and brought back play as an indignant Thwaite professed that it was not a foul (and therefore should have been a goal!).

The Cove were disappointed and showed their clear frustration with a resounding and yet entirely predictable chorus of boos as the ensuing free kick by Byun missed the mark.

Immediately Gold Coast United coach Miron Bleiberg went to the bench to bring on one time Manchester United player John Curtis. Curtis contribution lasted exactly 51 seconds as he led with the arm to challenge a header with Hiro Moriyasu and was sent to the showers early.

Sydney tried valiantly to make the numerical advantage work in the defending Premiers and Champions favour throwing everything bar the kitchen sink at the goals behind The Cove end.

On 80 minutes Alex Brosque struck the post with a sublimely hit drive but that would be closest Sydney would come to breaking the deadlock and getting their first three points of the season.

Sydney have been reluctant to replace the spine of their side following the departures of Clint Bolton, Karol Kisel, Steve Corica, Simon Colosimo and John Aloisi and unfortunately it has shown in the Hyundai A-League season to date. The squad needs a youngster to make the step from starlet status to young prodigy a la Matthew Leckie and Adelaide United.

Sydney can take many positives into their next match on Wednesday night at Moore Park Road against the North Queensland Fury in the battle of the cellar dwellers. Sydney’s increased possession and comfort on the ball will stand them in good stead against North Queensland’s chargers but will require more confidence and assuredness in the final third where a deft touch all too often eluded the Sky Blues.

0
Although their hope of making the championship match in their inaugural season was brutally cut short by Sydney FC, Western United proved that there...
Read more

0
It was third time lucky for Melbourne Victory in the 2019/20 A-League season to find a Head Coach. With the announcement made earlier in the...
Read more

0
Although their hope of making the championship match in their inaugural season was brutally cut short by Sydney FC, Western United proved that there...
Read more
Hyundai A-League

A-League transfers a must

0
For many years fans have grown tired of the ‘player recycling’, as players go from club to club in the A-League. One way to combat...
Read more
Featured

Where to next for Lionel Messi?

0
All good things must come to an end, and sadly for Barcelona fans it looks like Lionel Messi’s fairytale time at the club has...
Read more