Brisbane Roar closed the gap on A-League leaders Adelaide United to just three points with an impressive 2-0 win over the Central Coast Mariners.

Despite a disappointing record low crowd of just 5,051 at Suncorp Stadium, the Roar put on a superb showing and claimed victory with goals from Thomas Broich and Ivan Franjic. 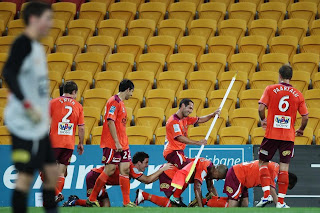 The Mariners were poor to say the least, and the casual observer would have been forgiven for thinking this was a top against bottom clash rather than a game between the second and third placed sides on the ladder.

Indeed, the visitors failed to register a shot on target throughout the 90 minutes. However it was their first game in 18 days following an extended international break, something which coach Graham Arnold pointed out afterwards.

“We were rusty. The last game we played was October 2 against North Queensland,” he said.

“I thought we played in fits and spurts. We’ve got another bye this weekend and then that’s our three gone and we can get back into some rhythm and routine.”

Brisbane came out of the blocks swiftly and skipper Matt McKay almost opened the scoring on 16 minutes but his strike rebounded out off the woodwork. They took the lead just minutes later though thanks to a contender for Goal of the Season from midfielder Thomas Broich. He picked up the ball on the left side of the penalty area, cut inside and curled a stunning effort over goalkeeper Matt Ryan and into the far corner of the net.

The hosts should have made it 2-0 before half time. Teenager Ryan spilled a routine strike from Broich and in trying to prevent the ball going behind for a corner, he inadvertently presented it to Reinaldo but the striker somehow shot wide of the open goal.

Roar eventually doubled their advantage just after the hour mark and it was thanks to another strike of genuine quality, this time from Ivan Franjic. A corner was only partially cleared to the defender 25 yards out and his shot through a crowd of players flew into the net.

The only bright spot for Central Coast was a debut for 17 year old young Socceroos international Mustafa Amini.

Roar coach Ange Postecoglou spoke of his delight at the win, and was understandably happy with his side’s two goals.

“It was always going to be a tough one for us, but to the boys’ credit they worked really hard tonight when they had to,” he said.

“We probably weren’t as smooth as we have been in other games, but I thought we still dominated the contest, and we scored two cracking goals which was pleasing as well.”

The win stretches Roar’s unbeaten run at Suncorp Stadium to seven matches and they are now four points ahead of the Mariners.