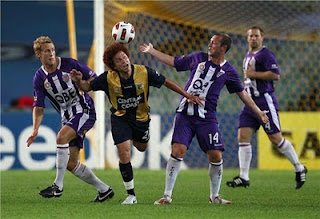 The Central Coast Mariners inflicted Perth Glory’s seventh straight defeat with a comfortable 5-0 win in the second game of the A-League double header at the Sydney Football Stadium today.

Goals from Rostyn Griffiths, Matt Simon and substitute Adam Kwasnik were just reward for a truly dominant performance against very poor opposition.
Glory boss Ian Ferguson made wholesale changes following last week’s home defeat to Sydney FC. Tando Velaphi returned in goal in place of Alex Vrteski, while Mile Sterjovski, Naum Sekulovski, Ryan Pearson and Andy Todd replaced Michael Baird, Jamie Harnwell, Adriano Pellegrino and the suspended Jacob Burns.
For the Mariners, Mustafa Amini started his first game for the Mariners who were once again without playmaker Patricio Perez.
The first quarter of the game passed by without any incidents of real note as the sides managed just one effort at goal between them, and that was off target. The first big chance fell to the Mariners on 26 minutes when good work by Michael McGlinchey down the right caused havoc in the Glory defence but Velaphi made a great save to deny Daniel McBreen’s header on the goal line.
Robbie Fowler squandered a chance for the visitors to take the lead just after the half hour mark. Todd Howarth was released down the left hand side and his pull back fell nicely to the former Liverpool and England striker but the shot trickled harmlessly wide of Matt Ryan’s left post.
The deadlock was broken on 35 minutes. Mile Sterjovski gave away a free kick just outside the left corner of the box and Pedj Bojic’s dangerous inwinger was met by a free header from Rostyn Griffiths. It was just reward for the Mariners who were by far the better team in the opening half.
The second half began as the first ended with the hosts dominating, and Matt Simon should have doubled his side’s lead but could only fire over from Bojic’s cross. At the other end, Glory had a goal disallowed when Todd Howarth met Adriano Pellegrino’s cross at the back post but the winger had been offside before he played the ball into the area.
The Mariners doubled their lead just before the hour mark through Matt Simon. Daniel McBreen capitalised on a slip by Jamie Coyne to roll the ball across the six yard box where Simon was on hand to tap home. Two became three with 14 minutes remaining when Alex Wilkinson controlled the ball in the area and fed Adam Kwasnik. He showed good composure to fire low past Velaphi into the bottom left corner of the net.
Another substitute, Matthew Lewis, made his mark on the game with four minutes remaining. McGlinchey got a rather fortuitous rebound off one of the Glory defenders and his outside of the boot pass found Lewis in the area. The Scottish underage international took one touch and fired home superbly. As the game moved into injury time, Central Coast rubbed salt into the proverbial wounds. Lewis got free on the left and his cross was turned into his own net by Naum Sekulovski to compound a horrible evening for the West Australians.
The defeat extends a club record run of losses for the Glory and on this form it looks like it will be a while before that changes. The Mariners meanwhile move back into third position, leap frogging both Gold Coast United and Melbourne Victory.
Central Coast Mariners: M. Ryan, D. McBreen, J. Rose, P. Bojic, P. Zwaanswijk, R. Griffiths, O. Bozanic, M. McGlinchey, A. Wilkinson, M. Amini, M. Simon.
Subs: P. Henderson, M. Lewis, C. Doig, A. Kwasnik.
Perth Glory: T. Velaphi, R. Pearson, A. Todd, J. Coyne, N. Sekulovski, M. Sterjovski, S. McGarry, S. Neville, T. Howarth, R. Fowler, B. Jelic.
Subs: A. Vrteski, M. Baird, A. Pellegrino, A. Skorich.

After an impressive start to the season which sees Brisbane Roar sit second on the A-League table, the club’s fan base dare to dream. Capable...
Read more
A-League

Newcastle Jets will look to increase their unbeaten run to six games when they face Wellington Phoenix at McDonald Jones Stadium. The Jets are coming...
Read more