The Melbourne Heart have held on for a stunning 2-1 win over their cross town rivals, the Victory, at AAMI Park tonight.

A healthy crowd of 25,897 rolled in to be a part of what is sure to become the A-league’s genuine derby.

The Heart’s foreign players showed their worth with Alex Terra finishing off a fine cross from Rutger Worm in the 56th minute; however, this was hardly the nail in the coffin as the Victory refused to go quietly.

The Heart drew first blood through marquee signing John Aloisi in the 10th minute, after a deft cross from the ever-present Terra.

The Heart had more opportunities to go further ahead, although the stubborn Victory defence, lead by Kevin Muscat, were defiant in front of their own goal.

Muscat was the animator for the Victory in both attack and defence, setting up the Victory’s first goal in what was a fine display football nous. Muscat’s chip to a charging Robbie Kruse exposed a napping Heart defence that appeared to have switched off before the break. Kruse added the finishing touches and both sides entered the sheds at half time 1-1.

A card happy Ben Williams seemed intent on maintaining control of the contest. After booking several players, Aziz Behich received his marching orders after getting his second yellow following a sloppy tackle on Robbie Kruse.

The Heart maintained their poise as Melbourne searched for the equalizer. Heart coach, John van ‘t Schip, showed his frustration after 5 minutes of stoppage time was added.

For the Heart players, this was an eternity, as they were forced into defensive mode with only 10 players. The Victory came close in the dying minutes, but failed to match the enthusiasm of the Heart.

This is the Heart’s third win for the season, and despite the absence of captain Simon Colosimo, their relatively young side showed great maturity, which is sure to put them in good stead for the remainder of the season.

The Victory drop one spot to sixth, and are far from their best. They continue to search for that x-factor in front of goal this season. 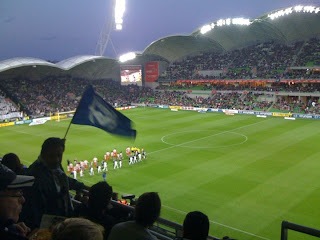 Above: Inside a packed AAMI Park.