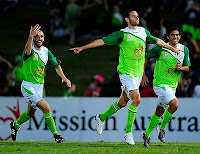 Ian Ferguson’s tenure as Perth Glory coach got off to a poor start tonight as his side went down to their fifth successive A-League defeat against the North Queensland Fury.

Ferguson, who took over from Dave Mitchell earlier this week, chose to bench regular goalkeeper Tando Velaphi in favour of Alex Vrteski, while Anthony Skorich and Michael Baird made up a previously untried forward partnership in the absence of Robbie Fowler.
For the Fury, Dyron Daal was ruled out through suspension but skipper Ufuk Talay returned after a ban of his own.
With the Asian Cup coming up in January, it was also a chance for a number of potential Socceroos to impress in front of new national coach Holger Osiek as the rain poured down at Dairy Farmers’ Stadium.
Both sides defended poorly, albeit in difficult conditions, and it was surprising that there were only half as many goals as when they played out a 3-3 draw on the opening day of the season.
Glory had chances to take an early lead through Skorich and Steve McGarry, but it was the hosts who took the lead when Chris Payne fired home on 22 minutes. David Williams picked up the ball 35 yards from goal and when Naum Sekulovski tucked in to challenge from left back, the ball was fed to Payne who advanced into the box and rifled a wonderful right foot drive into the top corner past Vrteski.
However the lead only lasted six minutes as Michael Baird brought his side level with his first Glory goal. He burst into the area as the Fury defence parted before him, and when the ball broke loose to Skorich, the young striker squared the ball back to Baird who tapped home from six yards.
Fury had a glorious chance to retake the lead seven minutes before the break. Gareth Edds’ cross eluded everybody and landed at Brad McDonald’s feet at the back post but his left footed drive thundered off the cross bar and bounced over for a goal kick.
Both sides came out attacking in the second period. Gareth Edds fired just over on 48 minutes as Glory fell asleep from a quick free kick while at the other end, Skorich sliced wide from twelve yards when he should have done better.
The visitors enjoyed a good spell of possession around the hour mark but were unable to create any clear cut chances, and they were made pay on 71 minutes. A neat one two between with Payne let in David Williams and the impressive midfielder easily outpaced Andy Todd before finishing coolly.
Just two minutes later Williams could have added his second and the Fury’s third but he fired over in a four on one break. However the 22 year old’s overall performance would have done his international prospects no harm and he has now scored in his last three games against Glory.
Perth pushed hard in the last ten minutes, naturally leaving gaps at the back, but the Fury were unable to stretch their lead thanks to some horrific offside decisions from the referee’s assistant.
Williams’ strike proved to be enough though and the win sees the Fury leapfrog the Newcastle Jets into ninth spot on the ladder, just a point behind the struggling Glory.
North Queensland Fury: Pasfield, Hingert, McDonald, Akoto, Hughes, Talay, Edds, Williams, Kilian, Payne, Storey.
Subs: Usai, Grossman, Sseppuya, Malik.
Perth Glory: Vrteski, Neville, Sekulovski, Todd, J. Coyne, Burns, McGarry, Sterjovski, Howarth, Baird, Skorich.
Subs: Velaphi, Harnwell, Jelic, Pellegrino.
You can watch the A-League live for only $25 a month. Click here to read our review of Kayo Sports and to start your 14-day free trial.
Share
Facebook
Twitter
Pinterest
WhatsApp