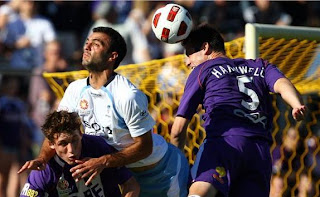 Sydney FC finally got their first win of the season today, and in the process inflicted a sixth straight league defeat on a very poor Perth Glory.

Ian Ferguson followed up his benching of Tando Velaphi last week with by consigning marquee player Mile Sterjovski to a place amongst the substitutes and went with the returning Robbie Fowler up front with Branko Jelic.

It was Sydney who took the lead after 25 minutes when Bruno Cazarine headed a Hirofumi Moriyasu free kick past Alex Vrteski in the Glory goal. They could have gone two up when Brosque was set free by Moriyasu but Scott Neville came from nowhere to make a superb last ditch challenge.

Sydney captain Terry McFlynn, who has come in for plenty of criticism lately for his supposed lack of leadership, was superb in the middle of the park and stepped up to lead by example. The visitors doubled their lead six minutes into the second period when Shannon Cole’s cross was only partially cleared and Alex Brosque was on hand to finish with his left foot.
Glory were denied a possible penalty just before the hour when Branko Jelic’s overhead appeared to strike the hand of Cazarine. However referee Ben Williams waved away the protests.
Substitute Mark Bridge came close twice in quick succession but on both occasions Vrteski was equal to the task.
The win was sealed nine minutes from time when Cazarine capped an excellent individual performance with a neat run and finish for his second. However, the defending, or lack thereof, from Glory’s Jamie Coyne was disgraceful in what was yet another abject effort from the centre half.
The normally partisan Shed end at nib Stadium was subdued throughout the game, and was close to empty once Cazarine put the final nail in the coffin.
A foul throw by Sterjovski in the final minute of injury time summed up a miserable afternoon for Glory but Sydney will head back east delighted with their efforts and the three points.

Sydney FC ($20) have now lifted themselves off the bottom of the A-League market on Betfair while Perth Glory ($15) continue their dramatic fall to sit 7th favourites. Remember that The Football Sack readers get a $50 free bet when they join up to Betfair through the link below!