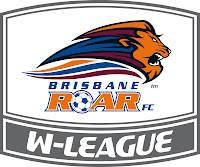 On a very warm day in Victoria a ‘new look this year’ Melbourne Victory, took on Brisbane Roar at AAMI Park. With a different formation Brisbane looked a changed side from the largely uninspiring side that came out last week.

In the 23rd minute starting from the Keeper Casey Dumont the ball was played wide to Clare Polkinghorne and then centered to find an on-coming Tameka Butt. With just a hint of handball Tameka controlled the ball, did the shimmie shimmie, passed two defenders in the 18yd box and calmly and coolly slot home the first goal far post.

Just two minutes later, again using the wide channels Elise Kellond-Knight crossed another nice ball which was touched-on by Lana Harch finding Tameka Butt who controlled and slotted home her second goal. For the rest of the half it was all Brisbane who should have scored more.

The second half saw the exit of quite possibly Melbourne’s main attacking weapon in UK import Jodie Taylor. So it was a bit ominous for Melbourne but such as soccer Victory scored next thanks to a defensive error by a poor Roar back pass. Caitlin Friend who showed no mercy latched onto the loose ball, rounded Dumont and finished with a goal in the 65th minute.

Caitlin’s goal made the play just before even more telling when Tameka Butt missed a sitter in front of goal which would have been her hat-trick with nice ball feeding again by Elise Kellond-Knight. Lisa De Vanna came on in the 59th minute and 12 minutes later a long ball by Kim Carroll found Lisa way past the defense for the second week in a row and with her great composure placed the ball past Matilda Goalkeeper Melisa Barbieri.

In the 81st minute Lisa then unselfishly played a ball to the young Emily Gielnik who still had some work to do before she cracked a great finish to the back of the net. Numerous opportunities abounded for Brisbane to make the margin even larger if it but for some poor finishing. Melbourne did have a good last ditch effort by Ella Mastrantonio in the 89th minute with a long range dipping shot that hit the crossbar.

It ended in a 4-1 win to the Brisbane Roar which by virtue of a Sydney FC bye shuffles them up to top place on the W-league table.

This week Brisbane looked good, better than they have been all year. With a slightly different setup they kept good shape. A criticism from last week of not using the wide channels was corrected this week and predominately this is how they by-passed Melbourne’s defense and controlled the game.

The Roar stayed relaxed with the ball at their feet and constantly played back and switched play when under any pressure. This was much better professional play by the girls; properly utilising the wide channels and stretching the opposition’s defense. Unfortunately for Melbourne they were out gunned by a better side. Their youth and inexperience did come through and they didn’t have the style of play of Brisbane’s. Best for Brisbane were Tameka Butt, Elise Kellond-Knight and Jo Burgess. For Melbourne, U.S import Kendall Fletcher, Ella Mastrantonio and Snez Veljanovska.

Don’t forget to regulary check our W-League page for everything in the women’s game and a weekly player diary from Brisbane Roar Captain, Clare Polkinghorne. Also Have a read of our interview with prolific Roar striker Lisa De Vanna and Matildas Coach Tom Sermanni.