Glory lose out to Gold Coast as a hero says goodbye

It wasn’t the most fitting result to farewell a club great, but Jamie Harnwell will take nothing but good memories from a 12 year Perth Glory career which ended today with a 2-1 defeat to Gold Coast United.

A partizan crowd in The Shed created a superb atmosphere, and a specially made banner thanking Harnwell was unfurled before the game amid a shower of purple and orange streamers.

Glory started quite well but failed to create many chances of note, with young striker Adam Taggart shooting tamely at Moss when he should have done better.

It was the visitors who broke the deadlock on 33 minutes when Harnwell fouled Golgol Mebrahtu in the area and Shane Smeltz stepped up to slot the ball past Tando Velaphi. The Kiwi has been heavily linked with a move to Western Australia for next season and he certainly did his best to impress the perspective suitors.

There was more of the same 11 minutes after half time as United were awarded a second penalty. This time it was Josh Mitchell who was the guilty party, bringing down the marauding Adam Traore, and Smeltz once again converted.

Referee Jarred Gillett did little to endear himself to the home faithful throughout the game as he turned down more than one shout for a penalty.

Unlike much of the season, Perth’s heads didn’t dropped and they were much the better side for the remainder of the game. Steven McGarry came close to giving them a lifeline as his vicious dipping volley from the edge of the box went agonisingly over the bar.

Taggart should have found the net soon after when he rounded goalkeeper Glen Moss but panicked and fluffed the chance. 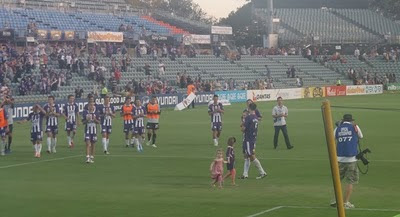 With twenty minutes to go, Glory played the card that has so often been required as Harnwell was sent up front. The move paid off almost immediately as Josh Mitchell’s long ball from defence was nodded down by Harnwell to Taggart who connected perfectly to score past Moss with a volley.

Glory pressed hard in search of an equaliser with substitute Tommy Amphlett causing havoc on the right wing, but there was to be no fairytale finish as Gold Coast held on for all three points.

“The club has always been there for me,” Harnwell said.

“It’s been a rollercoaster at times and unfortunately today didn’t have the fairytale finish.”

Thousands stayed behind after the final whistle as Harnwell did a lap of honour around nib Stadium before being carried from the field by his teammates for the last time.

The game was Glory’s last at home this season and they will travel to the Newcastle Jets on Wednesday for their final fixture. Gold Coast meanwhile end the regular season at home to Brisbane Roar next weekend before getting set for the finals.

0
Football Federation Australia (FFA) has given park footballers a timely reminder about its betting guidelines by sanctioning an amateur player in Western Australia. The player...
Read more
Hyundai A-League

0
Outgoing Head of the A-League Damien de Bohun yesterday fired something of a parting shot at sections of the competition’s support who have called...
Read more
Socceroos

0
Football Federation Australia (FFA) today confirmed two friendly games for the Socceroos against Greece later this year, and it was hard to contain the...
Read more
Hyundai A-League

0
The A-League transfer window has barely opened and already Perth Glory have made a significant move, with Dutchman Guyon Fernandez dumped in favour of...
Read more