W-League: TFS Team of the Year

Now that the season has come and gone, It’s time to see which players have made a name for themselves this year, and who will make our prized “TFS Team of the Year”

Some of the key contenders for our selected team were:

Goal Keeper:
• Lydia Williams, Canberra – Experienced and safe hands, the stopper for Canberra and as always was in good form this season.
• Casey Dumont, Brisbane – This young girl is Australia’s future in Goalkeeping.
• Tine Cederkvist, Perth – The Danish International with lots of talent. Wishes her team could play possession football but still able to show her class.
• Dimi Poulos, Sydney – Graduated through the US college system and has proven herself beyond any doubt. Has shown that while not being tall, one can still be a quality goal keeper.

Centre backs:
• Ellie Brush, Canberra – Such a strong and smart defender. Not to mention goal scorer (really should be up for Australian Matilda selection).
• Kendall Fletcher, Melbourne – US import who normally plays in the midfield but has been playing this position of late for the Victory.
• Tanya Oxtoby, Perth – Seasoned Campaigner who always leads by example.
• Servet Uzunlar, Sydney – No nonsense defender, formally a midfielder but has played for Australia recently in this position.
• Caitlin Cooper, Canberra – Combining with Ellie Brush to create a near impenetrable defence in the W-League this season.
• Marlies Oostdam, Melbourne – Don’t mince with this New Zealand International or you could end up as mince.
• Thea Slatyer, Newcastle – Must be one of Australia’s best going around. Smart and quality.

Wing backs:
• Caitlin Foord, Sydney – Played as a forward before this season but in true US style these players make great wing backs. Definitely one to watch for in the future.
• Clare Polkinghorne, Brisbane – Can play most positions in the backs and midfield and an inspiring leader.
• Ellyse Perry, Canberra – A nice breath of fresh air. All round athlete who can setup and score goals.

Midfield:
• Sally Shipard, Canberra – Tough and a well balanced defensive midfield player. Back in the game after a forced break.
• Elisa D’Ovido, Perth – Hard working midfielder who never says die.
• Teresa Polias, Sydney – a classy defensive midfielder from Central Coast last year. Always in the right postion.
• Tameka Butt, Brisbane – A game breaking attacking midfielder. Effervescent on and off the ball.
• Heather Garriock, Sydney – A fit Heather is very hot to handle.
• Renee Rollason, Sydney – A player to have on your side. Nicknamed Rolls Royce and if she hit you, you would know why!
• Kylie Ledbrook, Sydney – Very reliable midfeilder either attacking or defending.
• Victoria Balomenos, Adelaide – Blink and she’s passed you. Great technique.
• Avii Luik, Brisbane – Technically good and can be a joy to watch.
• Emily Van Egmond, Canberra – With experience, this young girl will only improve.

Forwards:
• Lisa De Vanna, Brisbane – There is no-one quite like Lisa, always ripping up the defence. A handful as long as she can contain her emotions.
• Samatha Kerr, Perth – With a good midfield behind her, this girl can score goals and scare her opposition.
• Leena Khamis, Sydney – Has to be one of the best ball headers in the W-League and has a nose for goals.
• Jodie Taylor, Melbourne – UK import. When in the mood look out.
• Kyah Simon, Sydney – In sizzling form at the moment, way up there.
• Tara Andrews, Newcastle – One of the young prospects for the future.
• Melisa Feuerriegel, Newcastle – Nice strong playmaking forward or attacking midfielder. Enjoyed her work this year.

Final Selected Eleven for TFS Team of the Year 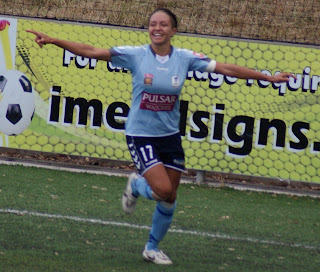 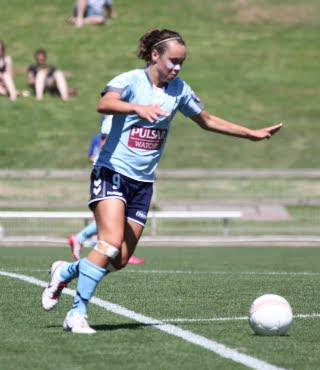