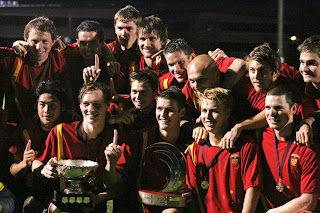 The Fire were crowned champions for the second year in a row with a 1-0 victory in the 2011 Grand Final at Perry Park to lift the Hyundai Queensland State League trophy.
The win over Brisbane Strikers sees the Sunshine Coast squad take out the Premiers Plate and QSL Championship double.
Fire’s head coach Richard Hudson was beaming after the achievement which capped off an excellent year for the club.
“It has been a good season; they’ve won everything,” he said.
“They perform better when they’re backs are against the wall. We had to beat Whitsunday and we did that comfortably. Then tonight we had to really dig deep to get a result, and we did. That’s the sort of team they are, and the character of the side is very strong.”
After hoisting the QSL trophy, the triumphant team shared their joy with fans, friends and family in the crowd. Hudson had no doubt some serious celebrating would be had.
“I’m sure it will be a big night, and it could be a big Sunday and Monday,” he said.
Before grand final action got under way at Bowen Hills, A-League champions Brisbane Roar, took on a representative XI comprised of North Queensland QSL teams.
The NQ side were bringing their best to the game, holding nothing back in conditions that appeared to suit the team from the tropics.
But with the rain pelting down relentlessly, neither side could assert any real dominance heading into half time 0-0. Ange Potecoglou’s men didn’t let the deadlock last long though. Just five minutes before the break, Mitch Nicholls worked into space on the left hand side, before putting in a low and hard strike that just got past the NQ defender, and ruffle the back of the net, giving the Roar the lead.
Before the second half began, officials decided against sending the teams back out, wanting to prevent the pitch from deteriorating any further in the wet conditions. So to the dismay of both teams, the exhibition match was called off.

Come 7pm, and the crowd had built to a healthy number before kick off, with over 1000 in attendance – not too bad for a soggy Saturday night with two major sporting matches happening
across town on the same night. There were plenty of familiar A-League faces in the crowd too, including Gold Coast United coach, Miron Bleiberg.
When Brisbane Strikers and Sunshine Coast Fire
entered the field to warm up it seemed the football Gods were watching over them, as the rain fortuitously stopped.

After kick-off it was the Fire who had best field position in the early stages, though the Strikers looked the more efficient in possession. That possession handed them the first of many chances, but Sunshine Coast never really gave them any
clear cut opportunities, with their backs holding strong. On the slippery surface, it was clear slide tackles would be a weapon of choice for defenders.

At the opposite end, Sunshine Coast were trying to build from the back to push into the Strikers’ danger area. However Chris Maher, Nick Robinson and Ryan Mottin were extremely calm in defusing any threats, and worked it to the midfielders well.
The Fire’s Ryan Smith had a good shot on goal from just outside the penalty area off a nice cross from the left of the pitch, but it was cleanly picked up by the Strikers’ goalkeeper, Brendan White who knocked it over the goal line. The corner was whipped in from the right, but headed far up the pitch for Sunshine Coast’s Alex Henderson to pass off to a teammate before being flicked back over to the left side, where Henderson had another shot on goal. The Brisbane ‘keeper saved it well though, clearing it only for it to come straight back at him just as quickly, with a pure shot from the Fire player catching White off his line and tracking back. Luckily though, the ball dipped too late, and just glanced the crossbar.
After that near miss, the Strikers went on the offensive and had a series of chances from some familiar names – Chris Di Sipio, Chays Hews, Matt Thurtell – but none could put in a decent strike to really worry the Fire’s ‘keeper.
Nevertheless Brisbane kept pushing forward and won a series of corners leading into the break. They could not however, find a way through the tall Sunshine Coast defenders who were repeatedly up to the challenge, sailing high above their opponents to avert any danger.
The Strikers were the only team really playing football on the pitch in the first half. Their passing, composure in possession and their movement up into the Sunshine Coast half was spot on; they just weren’t able to convert their numerous opportunities into goals.
Going into halftime, the scores remained 0-0 though it was clear the Strikers were clearly dominating.

Soon after the restart, as is a usual occurrence when these two teams meet, tensions flared.

Ryan Mottin’s boisterous tackle up-ended the Fire player, and despite his animated protest, he was rewarded with a yellow card for his efforts.

The ensuing free kick, taken by the Sunshine Coast captain Tyson Holmes, was easily dealt with. Though another Fire player, Judd Molea, was brought down with a clumsy challenge moments later, handing the Fire a golden chance on the edge of the box.
Much to the relief of the home crowd, the Brisbane side managed to deal with the free kick and head it out of their half.
The tension igniting in the stands was momentarily eased when a strike from Brisbane captain Chays Hews from 30 metres out, collected the ball boy behind the goals in a fashion reminiscent of a bowling pin being knocked down, providing unfortunate comic relief for the crowd.
Back on the pitch, and as these two rivals got more and more desperate to lift the QSL trophy they each lifted their attack turning the game into an end-to-end battle.
With conditions improving (thanks to the rain holding off), so did the football.
Tyson Holmes was finding plenty of space through the midfield. His work through the middle set up Leon Dwyer whose well timed attempt took a ripping save from White to stop.
Soon later up the opposite end, Brisbane’s Matt Thurtell and Sean Burke were pummelling the Fire’s defense with close-range shots successfully deflected by scrambling players.
Even though it was an end-to-end affair, Strikers still looked more likely to score, with more shots on goal, time in possession and time spent in the Fire’s half.
Strikers were unlucky not to score midway through the second half, when Sean Burke was awarded a free kick from 20 metres out, just right of the goal. Nick Robinson stepped up to take the free. His whopping strike somehow beat the five-man wall as it curled towards the top left corner. But the big swinging right paw of the Sunshine Coast ‘keeper, Antony Hall, ensured his place in the highlights reel, with a crucial save.
The value of that save was realised soon later.
Against the run of play, the galloping Holmes, set up the substitute Aaron Brazendale to run onto a pass at speed. Racing the Strikers’ goalkeeper, he got to the ball first before placing it in the left corner of the net, sending the travelling Sunshine Coast supporters wild, and giving his team the lead in the Grand Final.
It was at this point that those supporters, through song, helpfully noted the sudden silence in Brisbane Strikers corner of the stands. Cheeky bunch.
Conscious of the Strikers ability to respond well in past matches, the Fire did not sit back after going one goal up, and in fact began to assume the upper hand in play.
With just three minutes of extra time, the opportunity for Brisbane to finally win their first QSL title looked like it had gone begging once again. Always bridesmaid, never a bride, the final whistle blew and Brisbane hearts sank.

Sunshine Coast Fire had won their second consecutive QSL Championship, and their third in four years.

Fire captain Tyson Holmes was jubilant at
fulltime, but realised the quality of team they had to overcome.
“Their touches and movement is just so good, so sharp, and to keep them out to a clean sheet,
then we can’t ask for anything more,” he said.
For Holmes, their unorthodox route to finals may not have been easy, but it was a necessary challenge in the lead up to the Grand Final against the Strikers.
“Last week turned the table for us and got that ball rolling again, and we took it here tonight, put all the effort in, and we deserved it.”

For Brisbane fans, the loss was understandably devastating.

Strikers head coach David Large was disappointed, but not in his team.
“I was very, very proud of my boys.”
“I think if he [Sunshine Coast coach, Richard Hudson] was honest, he would have told you that we were the better team on the day and they got lucky,” Large defiantly said.
Even though his team was defeated, Large remained confident of the club’s ability to rebuild for their next shot at the QSL Championship, next season.
“We’ll sit around the table and we’ll discuss that over the next couple of months.”