Catch of the day for goal fisher Berisha 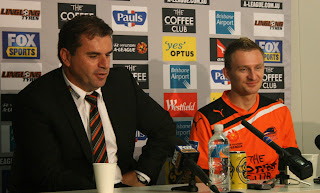 In his debut season in the Hyundai A-League, Brisbane Roar’s Besart Berisha has set the competition alight with a four-goal haul in his side’s 7-1 pounding of Adelaide last night.

The fired up import was tireless in his display up front for the home side, netting goals in the 23rd, 26th, 29th and 69th minutes.
“I’m having so much fun here,” the goal-scoring whiz said after the game.
“It’s so easy to score goals for me because the team is working so hard. I really respect how we train and how the players act.
“The way we play, it’s just amazing,” he said.
Berisha said not since his youth days had he bagged so many goals in a single game. Following his blitzkrieg attack on the Reds, coach Ange Postecoglou is wary of what this means for his new recruit.
“If the Albanian coach calls, I’m not taking his call over the next couple of weeks,” laughed the Roar coach.
Undoubtedly, with many of his players to be called on for international duties, Postecoglou would hate to lose his on-song Albanian now.
“Bes has been great from the first minute because of his willingness to work hard and adapt to what we want him to do.
“He’s a smart footballer and he knows his role in our team and he’s accepted that,” Postecoglou said.
After going a goal down against Adelaide in the 5th minute, Brisbane took their game to an all new level across the park.
They seamlessly worked their way through the Reds’ defence thanks to the deft-touches of Thomas Broich and Mitch Nichols. Massimo Murdocca was working hard from midfield too, finding space and creating chances for his teammates. Henrique may have scored his two goals off penalties but there was little conjecture over the legitimacy of the referee’s call. The Brazilian’s pace in the box was just too much to handle for Adelaide, drawing them into clumsy tackles in front of goal.
Postecoglou has repeatedly said Brisbane would get better, but no-one could have predicted an outing like this.
Facing the much-talked about Melbourne Victory next week, followed by the three teams that sit in second, third and fourth spot below them, the question is whether anyone will be able to truly test this impressive Roar squad. 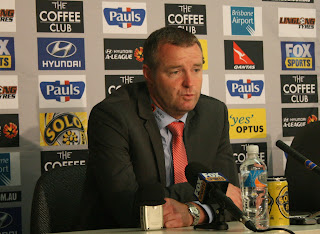 “How can you stop them? I don’t know,” said Reds coach Rini Coolen.
“We thought we found something that was good for 15 minutes, but that was it.”
Coolen praised Brisbane but also blamed his team’s poor defending for leaking so many goals on the night.
“It wasn’t necessary to lose the game already so early in the match,” he said.
“Giving goals away in such a short time – five goals in about ten minutes – I’ve never seen that myself, and it was a bit disappointing.
“We are making too many mistakes and at the moment we are not fit enough, so we have to improve in a lot of things. We also need to change our formation and our system because at this part of the competition losing so much confidence, we need to get points,” the Dutch coach added.
The Roar’s first half lead was too great for Coolen’s men to reign in. They could only try and stop the flow in the second half.
But Brisbane kept searching. Super subs Kofi Danning, Sayed Mohamed Adnan and the recently benched Issey Nakajima-Farran all performed well during their time on the pitch, with the latter even getting his first goal in the Hyundai A-League.
“I’ve just got so much admiration for this group of players,” Postecoglou said.
“Tonight was the complete performance. We didn’t beat just anybody they’re a good side. They just met us on a good night.
“There’s exciting times ahead.”