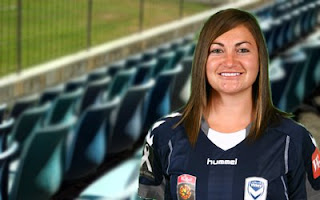 My name is Jodie Taylor, I am originally from Liverpool in England and I am the Captain for Melbourne Victory Women FC.

I have represented England from U16 through U23s and after stints abroad in the UK, USA and Canada; I am back in Australia to play a second season in the Westfield W-League.

My earliest memory of playing football was with my dad in our back garden. We had a little goal and all I remember was taking shots and volleying the ball at my dad in goal. My dad was the reason I got into playing football as he was a footballer himself and an avid Liverpool fan.

I think he was hoping to have a son to share his love for the game with but four daughters later he realised the odds were slim to none to have a boy… I’m the son he never had!

It wasn’t until I was 11 years old that I joined my first girls team; Tranmere Rovers FC. I played for Tranmere for seven years before leaving to pursue a football scholarship at Oregon State University in the States.

I had an amazing time playing at college in America as well as playing across the continent in the North American W-League during the summers, most notably Ottawa Fury in Canada and Pali Blues in California.

Although I loved living in the USA, I missed playing too much and at age 23 I knew I was too young to hang my boots up. So I quit my job, packed my bags, and left the states! It’s crazy to think I showed up to America with two bags and six years later I left with the same amount!

After leaving my job I played another summer for Ottawa Fury, and that’s where the opportunity to come to Australia arose. A few Aussie girls played for the Fury (Aivi Luik, Tameka Butt, and Servet Uzular) and passed on some contacts which resulted in connecting with Melbourne Victory Women and the rest as they say, is history.

Last season we had a great campaign finishing in the top four and making playoffs, the first time in Melbourne Victory history. However, on an individual note last season was a little disappointing due to suffering an Achilles injury early in the season.
Now that I am back healthy and fit – I have a big point to prove. I am extremely proud to be captain for Melbourne Victory Women this year and I am super excited for the season to start!

Hope to see you at the game!

Catch the W-League every week at your local ground, or if you cant make the game live on ABC1.

Stay in touch with The Football Sack for the rest of Jodie Taylor’s Blogs!

Newcastle Jets will look to increase their unbeaten run to six games when they face Wellington Phoenix at McDonald Jones Stadium. The Jets are coming...
Read more
A-League

Brisbane Roar coach Warren Moon is adamant that scoring goals will not be a problem for his side against an in-form Perth Glory side...
Read more