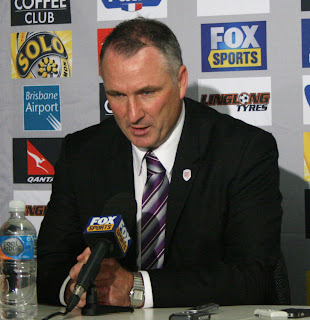 A first half flurry of goals from Brisbane Roar’s Issey Nakajima-Farran and Besart Berisha were enough to see off Perth Glory 4-0, and extend their record-setting undefeated streak to 36 games.
“Tonight’s performance epitomises the type of football club we want to be,” Roar coach Ange Postecoglou said after the match.
“We’re in the business of winning championships and winning trophies.
“Tonight the players got reward for all their hard work, which is great to see.”
On what was touted as one of the most historic occasions in Australian football, Brisbane lived up to expectations to break the long standing 35-match undefeated record set in the 1930s by Eastern Suburbs rugby league club.
In front of the vocal 19,339-strong crowd at the Cauldron, the Roar suffocated Perth’s defence and by half time they’d knocked four goals past Glory goalkeeper Danny Vukovic.
Though the first goal didn’t come until the 23rd minute, after that the floodgates opened and Brisbane’s attack went at full throttle.
“Once we got the first we really had them on the back foot,” Postecoglou said.
Despite facing criticism in past games for failing to finish his opportunities in front of goal, Canadian import Issey Nakajima-Farran added two goals to his name on Saturday night, as did the Hyundai A-League’s leading goal scorer Besart Berisha.
“I think our quality of play in the front third tonight was as good as it has been,” Postecoglou said.
“We’ve worked really hard on that in the last two or three weeks.”
As the Asian Champions League looms large, Postecoglou said he took confidence from the team’s performance with key players like Mitch Nichols and Matt Jurman still absent on national duties for the Olyroos.
“We’re going to hit a part of the season very, very soon where there’s going to be a hell of a lot of games and we’re going to need everyone ready to go,” he said.
“The good thing at the moment is we’ve got some good quality time into all our players.”
Like many coaches before him, Perth Glory coach Ian Ferguson was gob-smacked at the extent to which his team were outplayed.
“Credit to Brisbane, they’re on a different planet! “ Ferguson said.
Ferguson’s revised game plan after the break did show some positive signs for Perth, even without the suspended Liam Miller. But the Scotsman was still disappointed in the first half proceedings.
“Their rotation and movement and mobility and energy, it was fantastic, and we found it very hard to cope with,” he said.
“But it’s a lesson we’ve got to try on take on board.”
After the reaching the 36-game undefeated milestone, Roar coach Ange Postecoglou soaked in the jubilant atmosphere with a lap of honour around Suncorp Stadium.
But he doesn’t plan on resting on his laurels just yet, instead wanting to add to the record and continue the side’s winning ways.
“We’ve just got to keep improving, keep growing, and keep developing this group of players because they have the thirst and appetite for it now,” he said.
You can watch the A-League live for only $25 a month. Click here to read our review of Kayo Sports and to start your 14-day free trial.
Share
Facebook
Twitter
Pinterest
WhatsApp