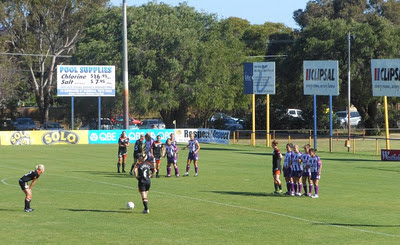 A Tameka Butt hattrick set Brisbane Roar on their way to a 5-2 win over Perth Glory at 6PR Stadium in Inglewood this evening.

The Matildas’ star was in fine form throughout the 90 minutes and fully deserved to leave with the matchball.

The home side meanwhile were disappointed to lose by such a margin given they had chances to be in front in the first half.

“It was disappointing; I think we definitely could have done better,” said striker Emma Kete afterwards.

“We could have got more from it and the game was definitely up for grabs. It wasn’t a case of trying to keep the score down or anything, we were in it to win it, but it’s pretty disappointing.”

The visitors started brightly and took the lead on six minutes when Butt fired a superb 25 yard effort into the top left corner of the net, giving Mackenzie Arnold no chance in the Glory goal.

Brisbane continued to set the pace, with Arnold having to get down quickly to deny Butt her second, while Laura Alleway had a header cleared of the line by Danielle Calautti.

However the Queensland side didn’t have things all their own way for long as Glory were awarded a penalty on 24 minutes when Ellen Beaumont was adjudged to have handled the ball in the area. New Zealand international Kete stepped up and slotted home the spot kick to bring the sides level.

Kete then had a great chance to put her side in front but shot straight at Casey Dumont after being played through by Katarina Jukic. The miss proved to be a telling one just seconds later when Butt made it 2-1 at the other end, pouncing on a loose ball in the area to finish past Arnold and give her side the lead going into the break.

It was a lively start to the second half as Brisbane looked to extend their lead and a third goal arrived just before the hour mark when substitute Emily Gielnik was in the right place at the right time to rifle home from 12 yards.

Things got worse for Glory after 71 minutes when an inswinging corner from the left found the back of the net with the last touch coming off Roar skipper Clare Polkinghorne to make it 4-1.

Brisbane were then awarded a penalty of their own for handball against Erika Elze and Butt made no mistake to score and complete her hattrick.

Marianna Tabain did give the home supporters something to cheer about late on with an excellent left footed finish to make it 5-2 but it did little to dent the spirits of the Brisbane players who were understandably delighted with the three points.