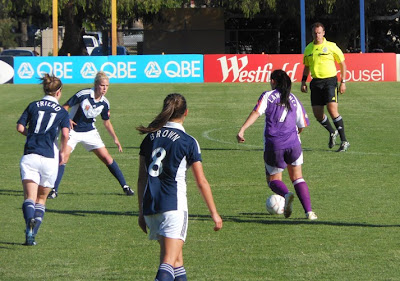 A Jodie Taylor hattrick and a brace from Katrina Gorry gave Melbourne Victory a resounding 5-0 win over Perth Glory in the Westfield W-League today.

Victory dominated from the word go and were good value for the three points and a warm afternoon at 6PR Stadium in Perth.

The hosts came into the game off the back a thumping 11-0 defeat to Sydney FC, a league record, and were without a number of players including the suspended Katie Holtham and Emma Kete and Lisa-Marie Woods who were sacked by the club midweek over disciplinary issues.

It was important for the Glory to make a good start but they did exactly the opposite as Victory’s Katrina Gorry opened the scoring after only four minutes, firing past Mackenzie Arnold from the penalty spot.

Gorry’s run from midfield were impressive throughout and she bagged her second of the afternoon on 24 minutes, racing into the area to lift an effort over the onrushing Arnold.

Two became three shortly afterwards when a cross into the area was missed by Glory defender Carys Hawkins and Jodie Taylor was on hand to pick up the loose ball and finish on her preferred left foot.

Chances at the other end were at a minimum, although Elise D’Ovidio did fire over from a tight angle, while Kendall Fletcher almost grabbed Victory’s fourth but her long range free kick was superbly tipped over the bar by Arnold.

Both Fletcher and Gorry came close to scoring shortly after the restart but it was Taylor who stretched the lead on 65 minutes when she latched onto a ball over the top to expertly lob the stranded Arnold.

Glory’s best chance of the game fell to Hawkins but her header from Marianna Tabain’s cross went agonisingly wide.

The game ended on a sour note for Glory with D’Ovidio stretchered over after a nasty collision with Victory goalkeeper Brianna Davey which left both players on the ground.

Substitute Shannon May almost notched a late consolation but her 25 yard drive rattled the crossbar and bounced over.

It was a much improved performance by Glory although the result was never in doubt once Victory got their noses in front early on.