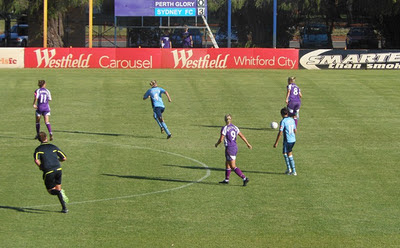 Sydney FC today recorded a 3-0 win against Perth Glory today at 6PR Stadium in the Westfield W-League, though they were pushed hard in the second half the home side.

Kyah Simon put in a strong performance, helping herself to two goals in the process, while Kylie Ledbrook was lively throughout.

Both sides were eager to see some action for the first time in 2012 but it was the visitors who got off to the better start, opening the scoring after just six minutes.

Ledbrook got herself free down the right and put in a dangerous cross which Glory skipper Tanya Oxtoby could only deflect into her own net.

Perth have conceded a lot of early goals in their games this season and it gave them a serious mountain to climb against a team who destroyed them 11-0 when they last met back at the beginning of December.

Sydney dominated possession throughout the first half and were rewarded with a second goal after 22 minutes when a short corner between Ledbrook and Foord resulted in a cross into the box which was nodded down by Leena Khamis for Kyah Simon to nod home.

Khamis could have added a another shortly afterwards but fired over from Rnee Rollason’s pass, while Glory keeper Mackenzie Arnold got down superbly to save Ledbrook’s low drive.

It took half an hour for Glory to register a shot on target but Marianna Tabain’s effort was tame and straight at Allison Lipsher.

The third did finally arrive for Sydney on 42 minutes when Simon netted her second, lashing the ball home from inside the penalty area.

The hosts started the second half strong and could have pulled a goal back but Katie Holtham shot over after good work from Shannon May and Katarina Jukic.

Ledbrook continued to impress but twice failed to score when found by crosses from Simon and Servet Uzunlar.

Glory brought on Elisa D’Ovidio to inject some pace into the team with half an hour remaining and it was from her cross that Glory had what looked like a strong appeal for a penalty following a handball in the area.

Uzunlar almost made it four for Sydney with a superbly hit 25 yard shot but her effort flashed just past the left hand post.

In the end, the second 45 minutes finished goalless much to the credit of Perth Glory who matched their opponents blow for blow after half time.

Sydney remains in third spot on the ladder on 17 points, one behind second place Brisbane Roar, while Glory stay bottom with just one win for the season.