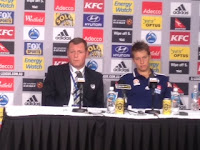 It was a nervous start for the home side who fell behind to the visiting Mariners after only eight minutes. Tomas Rogic found the back of the net after the Victory defence failed to put pressure on the 19 year old.

Despite the setback Victory found an equaliser through a blistering Carlos Hernandez strike. Then, early in the second half, Harry Kewell reminded everyone exactly what he is capable with a magnificent left foot volley to hand Magilton his first win.

The comeback pleased the Victory coach and he lauded his players after the game.

“That’s the way I want us to play. We were composed throughout and we showed great character to get back into the game. We took the positives from last week and tried to build on that. I think confidence is starting to flow through the team”.

The Irishman will be relieved to pick up the vital three points, however knows that there is still plenty of work ahead for his side.

“We cannot get carried away. We play Brisbane next week and we have to make sure we go there to win. We have to keep the good work going”.

His counterpart Graham Arnold, opted not to criticise referee Peter Green for the harsh red card given to Trent Sainsbury but did admit it was a soft decision.

“I thought it was a yellow, but when I watched the replay I thought even a yellow is soft. I hope however the focus of the match is not on the referee but on the game itself.

“I think Victory played well and I think we played well, probably the best we have played in a while”.

Despite missing five players from the starting line-up, the Mariners dominated much of the first half, and continued to attack when down to ten men. Now having suffered two consecutive losses, Arnold is resolved to stay positive. And so he should. There is enough potential, quality and determination in this Central Coast team to finally put an end to the “Bridesmaid” tag they’ve picked up after failing to win a Hyundai A-League Grand Final in three appearances.

Victory still have plenty of work to do, starting next week against Brisbane. Anything less than three more points could see them fall as much as six points behind Newcastle Jets, currently sixth. If however results go Victory’s way , the blue side of Melbourne could well and truly be back in finals series contention by the end of next week.