The Crossbar: Miron’s gone! Say it ain’t so… 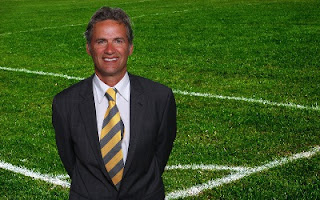 Miron Bleiberg walked away from his Gold Coast coaching gig on Sunday and perhaps no-one is more shattered than the folk here at The Football Sack.
Bleiberg’s coaching ability has been questioned at times but his passion and entertainment has not been. We sincerely hope he gets a gig in the Hyundai A-League next season because we might have to cut this column down by half without him.
Heart 1 def Gold Coast 0
Big Clive Palmer decided the best thing to do to take his club forward was to put a 17y.o. debutant in as skipper and then ‘suspend’ his coach for questioning the decision. That’s how things are rolling up on the glitter strip at the moment. Not much leadership, not much following. Melbourne Heart were able to record their first win of 2012 when Eli Babalj popped in the winner on 79 minutes. Fred made a triumphant return to football with a man of the match display.
Perth 2 def Newcastle 0
The ‘Sack Fergie’ club lost a few more members this week when the Glory outplayed the Jets. Adam Hughes came on in the 13th minute for the injured Liam Miller and scored two minutes later. A Fergie masterstroke? Big Billy Mehmet got his fifth of the season and it was glory days once more for Perth. If they can just nab a home final they will be a real contender come Finals Series.
Brisbane 3 def Kewell 2
Melbourne didn’t have to worry about conceding a lead when they went one down in the first 40 seconds to Brisbane. Berisha and Kewell scored twice each with a Henrique penalty the difference. A Carlos Hernandez thunderbolt would have seen voting closed on the all time best A-League goal but for that pesky crossbar. Melbourne can now book their winter holidays with chances of making the finals now slimmer than Kate Moss.
Central Coast 2 def Wellington 0
Tomas Rogic again showed us that blooding youngsters in the league is a win/win when he scored another goal beyond his years in the Mariners win over Phoenix. Former Motherwall striker John Sutton made his debut for the Mariners and looked at home right away. The Mariners now need to start the bandwagon rolling to get the Grand Final played at Bluetongue because they are a monty to be hosting the biggest day in the Hyundai A-League come April 21.
Sydney 2 def Adelaide 1
Ivan Necevski kept the Sky Blues in the game with some brilliant saves but it was Mitch Mallia’s athletic goal celebration that was the highlight of the night. After latching onto a long ball Mallia coolly beat Galekovic and then went into a cartwheel reverse flip the likes the A-League has rarely seen. Chianese also got onto the scoresheet for Sydney with a cleverly taken goal. In the space of one game Sydney have been able to effectively knock their two biggest rivals in Adelaide and Victory out of finals contention.
HAVE A LISTEN TO OUR AWARD WINNING PODCAST HERE
These snuck under the Crossbar and into The Sack (Likes)
1. The prospect of another Mariners vs Brisbane Grand Final. Epic!
2. This tweet: “@juliandcampbell Like – Carlos Hernandez; Dislike – The Crossbar”. We assume you mean the actual crossbar and not this column.
3. Mitch Mallia’s goal celebration. Good degree of difficulty, good landing, high points for creativity. @seamussantos
4.  Tomas Rogic, another great goal. How long before he is the labelled with ‘The next Viduka’ tag?
5. Eugene Galekovic starting the game in a black strip, the same colour as Sydney FC’s away strip. He was forced to change it to a sky blue top. Why doesn’t he just apply for a job at Sydney FC? @vossy7
These struck the Crossbar went straight down and we’re not sure if it crossed the line or not (we need video technology to know if we like/dislike them)
1. Miron’s sacking/resignation now gets the rumour mill into fifth gear. Sydney/Victory/Heart/Adelaide will all be linked to the A-League’s ‘king of quotes’. Lets just hope one of the clubs snap him up soon.
What went over the Crossbar (Dislikes)
1. Clive Palmer. An overwhelming response from everyone on twitter and the wider football community ‘disliked’ Palmer this week, using hashtag #PalmerOut to display their disdain.