Graham Arnold’s Central Coast Mariners say they will embrace the extra match up with Perth Glory next weekend, taking the long road for a chance at the Hyundai A-League Grand Final on April 22nd. 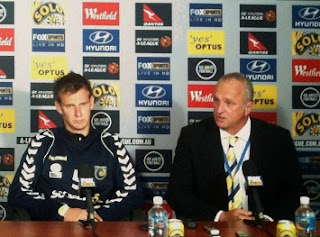 Despite going down 5-2 on aggregate after the home and away legs against the Brisbane Roar, the Central Coast are positive the additional match this weekend will help, not hinder them.

“There is a method to my madness and when you have a heavy schedule like Brisbane and ourselves have had, taking a week off will tend to flatten you,” said coach Graham Arnold.

The Central Coast are gritting through their challenging roster relatively unscarred and the side seems to be handling it like true professionals.

Rather than complaining about the strains of traveling, two competitive games per week, or the erratic Asian conditions, Central Coast Mariners are taking everything they can out of the hustle and bustle of Asian Champions League football.

Many expected the Mariners to show signs of fatigue in tonight’s match, however captain Alex Wilkinson had faith in fitness coach Andrew Clarke.

“Tonight definitely shows that fitness is not an issue for the boys out there and we will continue to get better.

“The more games of football we play the fitter and stronger we get, so we need to see extra games as positives and full credit to Clarkey for keeping us in shape,” said Wilkinson.

The Mariners went down 1-0 after the first minute of tonight’s play and soon after trailed by two. They then showed great character to score two in reply to sit on even terms and after some big decisions went against the Mariners it was a gallant effort to end just 3-2 down.

“A lesser side would have thrown the towel in at 2-0 but we kept pressuring Brisbane so full credit has to go to them,” said Wilkinson.

Brisbane Roar came into the match leading 2-0 on aggregate and easily could have thrown ten men behind the ball to kill the game and still qualify for the Grand Final.

But the Roar stuck to their match winning philosophy and pushed the Mariners right up until the 90th minute, making for a great spectacle of football.

“We come out looking to win every game and tonight was no different, we didn’t want to stumble into the finals we really had to win this game so I am glad we came out and scored three goals after a massive week and the boys pushed to score right up until the final minute,” said Roar coach Ange Postacoglu.

Unlike the Mariners, Brisbane will cherish a well deserved week off and be grateful to have a nine day break between now and their next ACL match.

“Forget the Grand Final, we are just happy to finally have a week off,” said Postacoglu.