A full complement of matches was welcomed by BPL fans across Brisbane, who certainly weren’t disappointed by a string of high-quality encounters. Redlands got the ball rolling with a hard-fought win over Rochedale on Friday night, before Wolves, Power and North Star recorded victories on Saturday. Easts and UQ shut each other out in the first goalless draw in over a month and only the third of the season. Lions and Capalaba also shared the spoils in the final game of the weekend, after Brisbane City comfortably beat cellar-dwellers Souths.

Redlands United sprung right into contention for the premiers title, with a heart-stopping late win over visitors Rochedale in a thrilling five-goal second-half.

Both sides enjoyed chances in a lively first 45, but a finishing touch was lacking. The same could not be said for the second half, with Keenan Duimpies opening the scoring for Rovers from the spot just five minutes after the restart. It was a well-deserved reward after Rochedale dominated early proceedings in the second period, but soon Redlands hit back. Referee Allan Milliner returned the favour as he pointed to the spot at the other end, Graham Fyfe making light work of the penalty. The Devils rode a wave of momentum and their persistence paid off when Rhys Meredith bedazzled the Rovers defence and found the roof of the net from the edge of the area. But just as Redlands had done in the first half, Rochedale found an instant reply, Carl Tabulo emulating Meredith’s spectacular thunderbolt, this time from Reuben Way’s cross. With a thrilling last ten minutes in stall, Redlands substitute Jheison Macuace took matters into his own hands and his bursting run earned his side another penalty. Graham Fyfe calmly converted to seal a momentous night for the Redlands faithful.

The win sees the Devils tied up on 37 points with Rochedale, with both sides trailing Wolves by four.

Wolves FC took full advantage of Rochedale’s loss on Friday night to open up, be it temporarily, a four-point lead from the chasing pack by smashing a hapless Taringa engulfed in relegation fears.

Skipper Paul Mikula got the show on the road after twenty minutes, rising high to head Wolves in front. Barely three minutes later, Trent Clulow doubled their lead from a deflected shot. Rovers steadied the ship and rode out the remainder of the first half dominated by the home side – a glimpse of things to come. Within ten minutes of the restart, Mikula grabbed his second goal and header to cap off a mesmerising passing move. Thomas Torzsok taunted the Rovers defence all night and got his just reward with a twenty-yard blast from the left flank to make it 4-0. Four soon became five when Clulow was brought down in the area, Mikula collecting his hat-trick from the penalty spot. When goals rain in at Carmichael Park it’s hard to put an end to it and Claudio Romano further embarrassed the visitors with a neat poke home. Somehow Taringa held their heads high and grabbed a consolation through a Matt Biggins header late on to spoil Marko Radovanovic’s clean sheet.

Wolves are undoubtedly title favourites after this display, while Taringa need to put the loss behind them before a tough home encounter with high-flying Redlands.


Richard Hurlin stole the limelight with a late winner for Peninsula as his brace kept Power’s premiers title dream alive and oversaw an Olympic side in danger of missing out on the top six.


The visitors enjoyed the better of the first half, as Danny Byrne spurned a handful of good chances, the offside flag undoing Olympic’s good work on more than one occasion. But they didn’t have to wait long, Byrne’s precision through-ball finding Alex Panic, who coolly chipped Jake Reesby to give Olympic the lead. The goal woke Power from a slumber and Richard Hurlin soon produced a speculative effort from thirty-yards out, curling a long-range strike into Jerrad Tyson’s near-post. But it was nothing compared to what was to come from the normally left-footed operator. As Power surged forward, enjoying momentum and the majority of possession, they could not break through a resolute Olympic defence who looked to be happy to settle for a point. With stoppage time running out, Power had one last chance from a 25-yard free-kick. Up stepped Hurlin to curl a Beckham-like winner to the delight of a boisterous home crowd.


Power’s win cut Wolves’ lead at the top to just a point, although Sam Saif’s men have a game in hand, while Olympic’s involvement in the finals now looks unlikely.


North Star fought off a desperate North Pine side to grab all three points on the road in a Saturday night relegation battle six-pointer.


Star cruised to a two-goal first half lead, as Royce Brownlie and Liam Previtera took their chances among a disjointed Gorillas defence. But Pine looked a rejuvenated side after the break and it showed when James Macintyre’s goal ten minutes into the restart brought them back into the game. Star’s response was even quicker, James Fairgrieve restoring the two-goal deficit three minutes later. The rollercoaster was in full swing, as barely two minutes passed before Nicholas Doyle again pulled one back for Pine. Their efforts were rewarded when Jason Keune completed the comeback six minutes later, as the proceedings braced the crowd for a grandstand finish. It came, but not from whom the home support was hoping, as Matthew Backstrom nailed home North Star’s winner with ten minutes remaining.


The gutsy win lifts Star out of danger for the time being, while North Pine remain second from bottom with season-saving games quickly running out.


A resolute defensive display by UQ shut out Easts’ chance to move into third on the table and prepare a late jolt at the premiers plate.


As expected, Easts dominated the majority of possession and the few chances in the game went to the home side. A lackluster first half produced little to get the crowd off their feet, as UQ displayed a high-class of organisation and concentration at the back. The best chances of the match fell late, as an Easts side desperate for the win surged forward in numbers. First, Ryan Stenhouse struck the crossbar from long-range. Apai Ukuno then found himself one-on-one with Tim Allen but the Uni custodian was up to it. Ukuno then hit the woodwork himself, Brendan Lewandowski unable to beat Allen on the rebound, leaving the game locked up after ninety minutes.


The gutsy performance leaves UQ hovering above the drop zone, while Easts have to contain themselves with fifth spot for now.


Brisbane City kept their finals push alive with a comprehensive victory at home to relegation-bound Souths.


An early brace from Andrew Shepherd got the Azzuri started and Antonio Murray soon made it three in what looked like a scoreline that could get out of hand for the visitors. To Souths’ credit, they regrouped and tightened up in defence to see off the first half 0-3 down, when it might have been a lot worse. The visitors even found a goal through Yianni Symons in the 58th minute to put credibility to the scoresheet. City knew the job was done and contained the remainder of the game, Thomas Schipke adding a fourth late on.


City sit one place and three points outside the top six, although with a game in hand over sixth Lions. Souths’ season goes from bad to worse as they must prepare for life in Division One.


A late Joel Drewek equaliser salvaged a point for visiting Capalaba to keep their finals dream alive and deny Lions a stranglehold on a top six spot.


A dour first half came to a close with both sides scoreless and giving nothing away in the back third of the park. As the second half wore on, the match opened up and both teams had chances to convert go astray. That was, until the 78th minute, when a brain-snap from Capalaba ‘keeper Tom Carroll saw him race well out of his box to clear when in little danger, only he sliced his clearance and hopelessly chased a opportunistic shot from Brett Hay that slowly approached the open net and finally trickled in. But the narrow scoreline proved too difficult to contain and the Bulldogs’ Joel Drewek unleashed a spectacular thirty-yard bottom-corner winner to the despair of his former coach Graham Ross – now at the helm of Lions.


The point leaves Capalaba trailing Lions by four points, with both teams facing a decisive month as they fight for a finals spot. 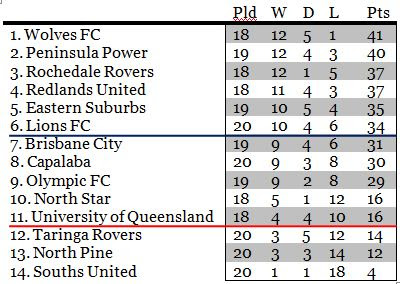