Capricorn Cougars have revitalised their finals ambitions by inflicting a horror afternoon on the QAS at Meakin Park on Sunday, upsetting the more fancied hosts with a 4-1 rout. 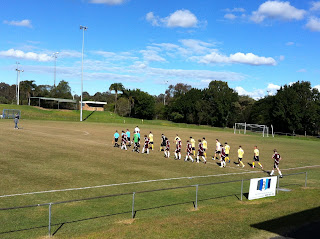 Despite taking an early lead, the home side imploded in the second half, conceding three goals and having their ‘keeper dismissed to finish the match with ten men.

The afternoon had started brightly for the Academy as usual right-fullback Alistair Quinn, moved into midfield to compensate for the absence of Ross Archibald, proved his more attacking credentials by opening the scoring just three minutes after kick-off. When the ball was touched back to fellow Academy midfielder Ben Liftin, occupying Archibald’s deeper role, Quinn spotted Capricorn’s dangerously high line and made an intelligent, untracked run through the heart of the defence. Liftin supplied the necessary through-pass and Quinn had time to settle in front of goal and finish coolly inside Tim English’s near post. The strike was his second in two matches at Meakin Park and illustrated strong claims for a permanent midfield berth.

A wealth of possession and numerous piercings of the Cougars’ defence in the opening exchanges indicated that a second might not be far off for the QAS, but indeed it was the visitors who had the next best chance.

After Academy defender Lachlan Jackson lost possession in striding into midfield, Dylan Krussrow took advantage for the Cougars, feeding Michael Cay through the opening who, when advanced upon by ‘keeper Matthew Stein, could only squeeze his shot wide of the post.

But, through the pressure applied to the QAS’ defence by the front three of Cay, Sander Waterland and Jordan Miller, Capricorn forced an equaliser.

Letting their opposition back into matches with avoidable and often irretrievably costly goals has haunted the Academy throughout the season and their weakness again arose in the 28th minute. It initially appeared as though Waterland’s chasing of a seemingly regulation pass-back to Stein would be merely a statement of intent. However, when central-defender Jackson, leading Waterland in the race towards goal, arrived at the same time as Stein, a mix-up between defender and goalkeeper left Waterland to stride into a vacant goal. The fortunate ricochet in the star man’s favour was reward for an improved passage of Capricorn play, albeit resulting from a lack of communication which QAS coach and former A-League defender Josh McCloughan would surely detest.

It was the league’s second top-scorer in Waterland who had sparked the Cougars’ revival and Troy Ruthven nearly put them in front five minutes from the break, striking the upright from distance as Stein was unsighted through a crowd of players. The half-time whistle brought to a close a period which had been largely even with few chances either way but, for the third week in succession, the QAS conceded early in the second-half.

Capricorn’s newly acquired attacking mindset was typified four minutes after the restart when Czech fullback Rudi Mozr weaved his way down the Cougars’ left attacking flank, combined for a one-two with Waterland to advance through the Academy defence and into the penalty area before shooting low into Stein’s near corner. Mozr’s outstanding run and finish was a nod to Capricorn’s creative recruiting – of which fellow Czech Republic native Jan Urban is also an example – as Dutch striker Waterland’s involvement in the goal added to his earlier leveller. When Cay struck the crossbar from a sweetly-hit free-kick, all momentum had appeared to shift the way of the visitors.

The QAS showed some signs of a comeback, or at least intent to do so, when Lachlan Jackson’s foray forward almost resulted in an unlikely goal, denied by the quick closing-down of Cougars ‘keeper English.

However, it was at the other end of the ground that a goalkeeper would see even more action. A neat pass through the Academy defence set Cougars substitute Chris Swain clean through on goal, only to be denied an open net when, having edged inside Stein, who had advanced outside his penalty area, the goalkeeper’s outstretched leg brought down the attacker. Stein was promptly shown a red card, meaning not only would the QAS contest the remaining minutes a man down, but their prior use of all three substitutes forced attacker Josh Riis to be tasked with goalkeeping duties.

And, with two minutes of regular time remaining, Swain got the goal he had just minutes earlier seemed certain to score – in an almost carbon copy of the prior incident. A QAS attack broke down and with the defence exposed, Swain latched on to a long punt forward to speed towards goal, though this time nicking his touch past the onrushing ‘keeper and applying the required tap-in. That two-goal buffer effectively ended the contest, although there was still time for Capricorn to snag a fourth as Riis failed to recover his position following a scrappy clearance, allowing defender Troy Ruthven to sneak in a seemingly reachable goal from well outside the penalty area.

The hectic final few minutes, which will see Stein miss at least the QAS’ next fixture through suspension, will have undoubtedly sapped the confidence of the young hosts as the eventual three-goal loss added to their underwhelming performance. McCloughan’s squad have now suffered four straight losses after seeming primed for a top-four challenge, while the upset win sees Joe Fenech’s Cougars pull level on points. They return home to meet Far North Queensland next weekend in the renewed hope a finals campaign.