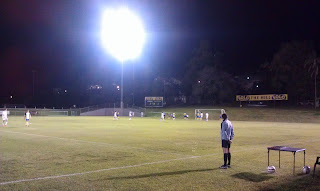 Brisbane Strikers have moved one step closer to the Queensland State League premiership with a 5-1 defeat of Gold Coast at Perry Park on Saturday night, extending the capital city club’s winning streak to six games and maintaining their unbeaten home record this season.
Striker Matt Thurtell notched up his fourth hat-trick of the season, and twenty-eighth goal of the campaign, while midfielder Michael Angus and wing back Lorenzo chipped in with a goal apiece for the home side.
The visitor’s goal came courtesy of first half substitute Bangaly Sheriff, whose night ended on a sour note after he was sent off for a second bookable offence five minutes from full time.
Despite the one-sided scoreline the match was still a hard fought contest throughout. The opening twenty-five minutes in particular resembling a true arm wrestle as both teams sought to impose their physical presence on the other.
The league-leading Strikers usual free-flowing passing game was noticeably rusty following last week’s bye, while the cellar-dwelling Gold Coast were desperate to make amends for a disappointing season both on and off the pitch.
Gold Coast wingers Rafael Agudelo and Daniel Bina proved threatening down both flanks early on, but a groin injury to the left-sided Agudelo saw him replaced by Sheriff in the 27th minute. This forced a reshuffle of the midfield and pounced upon the ensuing disorganisation to notch up two goals in as many minutes.
The opener came via Chay Hews’ defence splitting through-ball to Sippi, who he’d spotted on a marauding run down the right. Sippi’s cross was met by the heavily marked Thurtell in the centre of the box, the striker displaying strength belying his size to get to the ball first and poke it home on the volley.
The second came after Greg King picked off a wayward pass at the back. King quickly fed the ball to Thurtell, who, demonstrating a curious mix of composure and quick-thinking, lulled Gold Coast custodian Luigi Cordova off his line before lobbing the ball from an acute angle into the crook at the far post.
The goals proved a wake-up call for Gold Coast, and although they once again looked to threaten, they were unable to create a clear-cut scoring chance; their forward forays repeatedly denied by a combination of th ewell organised Strikers back four and the linesman’s offside flag.
The visitors had to wait until four minutes after the restart to claw a goal back; the substitute Sheriff doing well to rise high above the traffic to meet a deep corner kick with his head, turning it in at the near post.
The game now finely poised, the contest began to see-saw once again. And while Strikers had the best of the field position, Gold Coast were dangerous on the counter attack through Bina and target man Daniel Gecic.
Eventually it was that scored the next goal on 67 minutes, setting the tone for the rest of the contest.
Sippi, now playing in a more advanced position, dribbled infield from the right then slid a pass across the top of the penalty area. Chris di Sipio cleverly ran over the ball, allowing it to find the unmarked Michael Angus whose well-taken shot curved and dipped past the diving Cordova.
In the 82nd minute Angus returned the favour; the midfielder playing a pin-point cross-field pass to Sippi who took the ball at full pace before placing a neat shot under the advancing Cordova for the Strikers fourth.
With the result beyond doubt and the fifty-fifty decisions going against them, Gold Coast then lost their composure; a clearly frustrated Sheriff received two yellow cards in the space of five minutes, leaving the visitors a man down.
would rub salt into the wound in the final minute of added time. A free kick by King found di Sipio unmarked at the top of the area, and although his shot was blocked by Cordova, the rebound fell to Thurtell, who converted from a near-impossible angle to seal his hat-trick.
After the match, Strikers coach David Large pointed out that despite the score line the performance wasn’t up to standard.
“I certainly don’t think we played our best game tonight. We looked rusty,” Large said.
“Gold Coast were very physical, they were in our faces, and we probably didn’t deal with it as well as we should’ve done.”
Large was once again full of praise for Thurtell though.

Gold Coast coach Simon Tanti, who only took the reigns at the club six weeks ago, stated his disappointment in the result but not the commitment of his young players.
“I don’t think we deserved to lose 5-1. The team worked very hard today and it’s a lack of concentration for ninety minutes that hurts us each week,” Tanti asserted.
“Unfortunately when you play against a quality side there’s no room for error.”