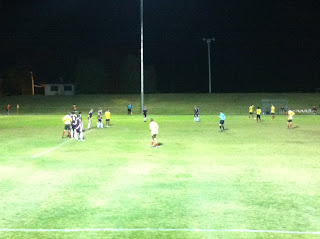 Sunshine Coast Fire furthered their pre-finals revival on Saturday night, easing to a straightforward 5-0 crushing of the Queensland Academy of Sport at Meakin Park.

The visitors’ two-goal half-time lead was extended to an ugly margin as diminutive QAS winger Patrick Theodore was dismissed early in the second term.

While Sunshine Coast arrived in Brisbane’s south with a finals spot close to secured, the QSL’s most successful side had only completed stage one of a recovering from a dire slump by destroying second-last North Queensland last weekend. Here, they were tasked with continuing that turnaround by securing consecutive wins for the firs time since round nine – against an opponent buoyed by a last-start draw away to the Strikers.

The match’s early signs suggested Fire were on track to achieve their goal, harrying the QAS midfielders into reduced options and making the first incisions. Captain Tyson Holmes, recently returned from a trial with A-League grand finalists Perth Glory, was floating from his attacking midfield position to circulate possession with holding pair David Muta and DJ Firth, who were undoing the QAS’ own structure. While clear-cut chances had been absent, a pair of blocked Fire efforts preceded their opener just before the half-hour mark.

Firth was not picked up as he drifted between the Academy’s lines to link with a flying Dakota Lucas, who glided past Lachlan Jackson and tucked his finish at speed neatly into the bottom near corner, leaving ‘keeper Andres Pascoe with no time to react.

The space occupied by Firth to create the goal should perhaps have been plugged by Academy midfielder Ben Liftin, who had been uninvolved in a role deeper than his early-season position. Star winger Brandon Borrello, who scored as a substitute for Brisbane Roar midweek, was also isolated on the touchline in trying to stretch the pitch.

Sunshine Coast should have gone two goals clear with eight minutes remaining in the half as right-winger Kaine Frew touched across goal from six yards, but tough defender Greig Henslee made sure the visitors would secure that advantage on the stroke of half-time.

Left-winger Nicolas Bechar was allowed to win a corner despite being heavily outnumbered, from which Henslee made the QAS pay by rising above stand-in skipper Alistair Quinn and looping a perfectly weighted header over Pascoe, off the underside of the bar and across the line. The goal came minutes into injury time and was typical of the basic lapses which have cost the QAS this season.

If Sunshine Coast didn’t have a stronghold on the contest at that point, they were in complete control when the Academy were reduced to ten men moments after the restart.

Nippy attacker Theodore, who picked up an innocuous caution midway through the opening term, was shown no leniency by the referee for a late challenge on Fire fullback James Stinson, awarded a second yellow which dashed the hosts’ already slim hopes of a result.

Firth, continuing to dominate the midfield alongside Papua New Guinea international Muta, was first to benefit, expertly controlling a bouncing ball past two defenders and squeezing his shot off Pascoe’s body for Fire’s third.

With the match sewn up, Sunshine Coast decided scoring a fourth was not an urgent priority, happy to test the sound Pascoe from distance rather than work openings, although Henslee was still prepared to hurl his body at any QAS shot.

Eventually, after toying with the Academy defenders in attack, Fire produced their fourth, and classiest, goal of the game. A set-piece was only partially cleared out to Lucas, who, from a central position, darted the ball back into the feet of Henslee on the edge of the penalty area. The rugged defender managed his second piece of striker-like deftness by touching the ball behind the QAS defence for Holmes to attack and lift over the advancing Pascoe.

Having gone goalless since his return to the side, Holmes grabbed a second just three minutes later by exploiting Pascoe’s heavy touch to slide in Sunshine Coast’s fifth. The impressive Muta almost capped an all-round performance when his close-range stab was cleared off the line, meaning Fire would have to settle for a five-goal win in which they were never threatened.

The QAS might point to the sending-off as ending the match but in reality they never once tested Sunshine Coast ‘keeper Dale Hill, leaving the visitors returning home with fourth-placed almost wrapped up and the Academy pondering a season that might have been.