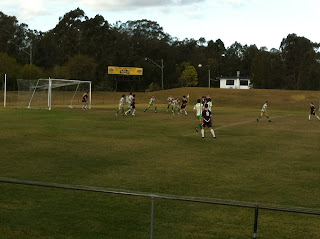 Jamie Hatch’s second-half howitzer has confirmed Whitsunday as Brisbane’s nearest title-challengers, while delivering a crushing blow to the Queensland Academy of Sport’s shot at finals football.

Whitsunday’s four-man defence were the collective stars of Sunday afternoon’s fixture at Meakin Park as central defenders Matt Oldring and Corey Hooper, alongside fullbacks Dean Faithfull and Warrick Jansen, consistently dominated the individual duels to nullify the pace and incision of the QAS attack.

A match played in perfect football weather was fully soaked up by both goalkeepers as neither defence was prepared to give the opposition a clear sight on goal, limiting the match to few clear-cut chances at either end.

Perhaps expected of a side unbeaten in five of their past six fixtures, the Miners started brightest, pressing the Academy and looking the most likely to take an early lead. The visitors came within inches of doing just that as midfielder Clark Bradford, currently sitting atop the league MVP tally, impeccably judged a ball drop to volley agonisingly wide with his unfavoured left-foot.

The QAS might be missing a host of talent as A-League clubs step up their pre-season campaigns – notable absentees being Ross Archibald and Kwame Yeboah, who both turned out for Brisbane Roar on the same afternoon – but it was a familiar threat who emerged as their key attacking weapon as Brandon Borrello twice got in behind the Miners line before being reigned in by dogged defenders.

Both ‘keepers were eventually made to be alert towards the end of the first half through a couple of testing crosses, although those examinations did little to stand out from a relatively chanceless half in which the Academy had pulled even in the latter exchanges.

Whitsunday, meanwhile, were missing a striking force of their own in the shape of goal-a-game sharpshooter Michael van Moolenbroek, and would have been looking to their attacking pairing of front-man Dan Corbett and number ten Bill Puckett to build on the platform set at the back. Fittingly, the two combined to come closest to opening the scoring for either side eight minutes into the second-half.

A collision with a QAS defender saw the ball break fortuitously for Puckett, whose attempt to knock the ball past Academy ‘keeper Andres Pascoe was partially diverted. Puckett regathered to lob the ball towards goal where left-back Joe Franze arrived just in time to head away from the QAS line. Corbett then pounced on the loose ball but, from a central position on the edge of the area, hurried his shot straight at the retreated Pascoe.

The moment of desperation injected urgency into a stagnant match, eventually taken advantage of by a Whitsunday outfit eager not to let another opportunity slip away.

Having skewed a shot wide barely minutes earlier, Jamie Hatch rose to the tense occasion by slamming his side into the lead a tick after the hour. The Englishman took full advantage of a clever layoff from midfield partner Bradford to hit a venomous strike from beyond twenty yards past Pascoe and into the QAS goal. The swerving bullet was worthy of breaking open a crunch fixture and meant the Academy would have to find a clear path to goal if they wanted to keep their finals hopes alive.

The golden chance for the home team surprisingly presented itself shortly after Hatch’s opener when substitute winger Samuel Sibatuara was set free on the Miners goal, but the youngster lacked composure and spurned his shot over Luke Nightingale’s crossbar.

That wasted opportunity was ultimately the QAS’ last clear sight on goal as the Whitsunday defence continued to stand firm for the remainder of the contest, seeing the Mackay-based club to three points and retaining their place in second. Another loss for the Academy, adding to a morale-sapping defeat to Gold Coast last weekend, means a minor miracle would have to take place to see them compete in finals football. Their attention, as ever, is likely to be focussed on developing the talents pushing to replace the now-departed regulars of the early season.