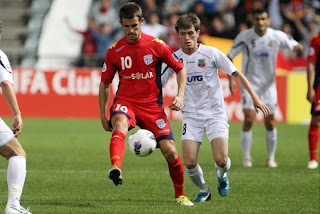 After switching coaches mid-season Adelaide have now had an Asian Champions League campaign and an extended offseason to work under John Kosmina. The adjusting period is over and a strong preseason has given United a solid launch pad to outdo a poor 2011/12 season. With all attention focused on Del Piero, Heskey and Shinji Ono, the Reds have flown under the radar despite an impressive showing in the ACL thus far.

They’ll Win The League Because…
…they’re solid all around the park. United have a strong base to lean back on this season with an experienced backline complimented with talented youth pushing for selection. Club captain Eugene Galekovic will be joined in defence by Càssio, Nigel Boogaard, Jon McKain and Iain Fyfe – a backline that boasts more than 400 A-League games experience.

Further up the field the Reds have Australian marquee Dario Vidosic to provide the link between midfield and attack while there’ll be plenty of pace out wide with Iain Ramsay and Evan Kostopolous patrolling the wings. Regular faces Bruce Djite and Sergio van Dijk top off what is a well rounded team with a strong mix of youth and A-League experience.

Adelaide’s time in the 2012 ACL will boost the side and give better preparation heading into the eighth season of the A-League which features true star power. Regular competition against the best Asia has to offer should give the Reds an edge when they finally return to A-League competition. United’s task will be to match their ACL intensity and consistently produce it on a week-to-week basis.

Immediate success will depend on how quickly Kosmina’s additions can adapt to the league and whether United can banish their demons at Hindmarsh Stadium after only securing two wins there last season.

They’ll Be Cellar Dwellers Because…
…of a lack of goals. Last season the Reds struggled all over the park and coupled the worst defensive record in the league (-44 goals) with the worst goal-scoring record (averaging less than a goal a game).

Sergio van Dijk was Adelaide’s most potent forward with eight goals, however rumours persist that the Flying Dutchman is unsettled and looking for a way home. Van Dijk’s departure could put a major dent in United’s hopes to return to finals football.

Despite scoring nine ACL goals this campaign, only two have come from the forwards with van Dijk and Djite chipping in with one apiece. Most of United’s rivals for the 2012/13 title feature either genuine class or proven talent up front with players such as Del Piero, Smeltz, Ifill, Heskey (don’t laugh) and Berisha headlining the frontmen for season 2012/13. If van Dijk and Djite fail to fire early, United will be forced to rely on new faces Fabio Ferreira and Jeronimo Neumann who are untested at A-League level.

Talk Around The Watercooler… Look smart in front of your colleagues with this valuable piece of information.
United’s new #8 Marcelo Carrusca was a member of Argentina’s U20’s team which made the 2003 FIFA World Youth Cup Championship. Alongside Carrusca in the squad was future Champions League winner Javier Mascherano as well as Manchester City’s Pablo Zabaleta & Carlos Tevez.

The Extended Off-Season Brought…
…ACL success and plenty of new faces. United cruised into the knockout stage of the Asian Champions League with four wins, one loss and one draw from their group matches. Their continental showing finally gave their frustrated faithful something to cheer about after a sub-par A-League season. The Reds head to Uzbekistan for the second leg in their Quarter-final clash with FC Bunyodkor. United will get an early taste of the quick turn-around as their Wednesday night match in Uzbekistan is followed up with their opening A-League match against Newcastle on Sunday.

A mini clear-out of players has occurred in Adelaide with six players signed by former coach Rini Coolen not returning for 2012/13, while two others have moved on to greener pastures. In response to these losses Kosmina has brought in five players on free-transfers and promoted a number of youth players to the first team squad.

Key Player…
Dario Vidosic. The talented playmaker boasts experience in the Bundesliga and on the international stage with over a dozen caps for the Socceroos. Vidosic has had a season to adjust to the league and after a full preseason should be ready to hit the ground running.

The 25-year-old has found the net regularly in United’s warm-up games with nine goals from 11 games. If he can steer clear of injuries Vidosic will provide the finishing touch to a United midfield with his ability to play the killer ball, or find the net from distance.

One To Watch…
Daniel Bowles. The 21-year-old appears to have the right amount of talent and temperament to slot right into the right-back for United. With Daniel Mullen and Spase Dilevski gone, Bowles will more than likely find himself thrust into a regular place in the starting XI.

Comfortable on the ball with pace to burn, Bowles also has the engine to work in the wingback role and will provide a genuine threat down the right side going forward. Bowles was a member of the doomed Gold Coast United set-up and got his chance to shine towards the end of the 2011/12 season. The 21-year-old started in just eight matches but took his chance with both hands, scoring two goals and catching the eye of United coach John Kosmina.