Glory Women off to a flyer in Perth 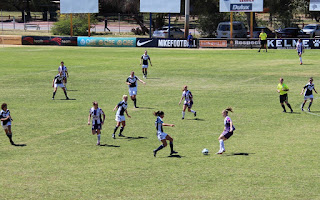 Perth Glory kicked off their W-League season at Intiga Stadium in Perth today with a 2-0 win over Melbourne Victory.

Returning star Kate Gill, who missed all of last season with a knee injury, slotted home the first goal 16 minutes from time before Marianna Tabain sealed the win late on.

The weather was hot, even with an early kick off time, but there was no questioning the commitment of the players in trying conditions.

Glory welcomed back internationals Gill and skipper Collette McCallum from their year off, while new signing from Chelsea in England, Carly Telford, made her debut between the sticks.

The game was Mike Mulvey’s first in charge of Melbourne Victory.

The home side enjoyed the better of the chances in the opening period, and McCallum had the crowd celebrating after nine minutes but her free kick went agonisingly wide of Davey’s goal.

Matildas forward Kate Gill was impressive, holding the ball up and bringing players in to the game, and she forced Davey in to a big save on 20 minutes.

Elisa D’Ovidio releasd Marianna Tabain on the right who put in a cross which Gill met first time with a sweet volley but Davey pushed it wide for a corner. It took half an hour for the hosts to register a shot but Enza Barilla’s effort from the edge of the box sailed harmlessly over.

Tiffany Eliadis volleyed wide of Telford’s goal towards the end of the half before she was forced to leave the field with a leg injury following a strong tackle by Sarah Carroll, though she returned after the break.

Carroll had a great chance to open the scoring a minute into the second half but shot tamely wide from a good position inside the box.

A long ball from Carys Hawkins then caused the Victory defence all sorts of problems but Gill was unable to make a clean connection with the goal at her mercy.

Both sides got stuck in to some crunching tackles as the game wore on and, for a period, neither side created any clear cut chances.

The deadlock was finally broken on 74 minutes though when Gill raced through and calmly finished past Davey.

Despite their efforts to get back in to the game, Victory failed to really test Telford and they fell further behind when Tabain curled a wonderful effort over Davey into the top corner after good work from Gill on the edge of the area.

In the end, Glory were good value for the win and the performance was a marked improvement on what was a disappointing 2011/12 season.