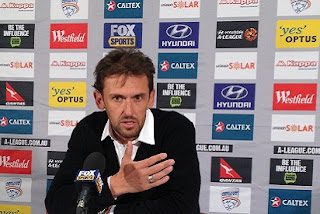 The Reds secured their second consecutive win of the 2012 Hyundai A-League season after a 69th minute Jeronimo Neumann strike gave Kossie’s charges a 1-0 victory over the Western Sydney Wanderers at Hindmarsh Stadium.

Argentinean Neumann was joined in the starting XI by Portuguese winger Fabio Ferreira, while Marcelo Carrusca came off the bench to complete Kosmina’s foreign trio.

Of the three imports, Neumann has made the biggest impression so far, scoring against Bunyodkor in Adelaide’s doomed Asian Champions League Quarter Final while backing up his assist in Round One with his maiden A-League goal against the Wanderers.

“Jeronimo is a natural striker and the way he finished his goal, I haven’t seen anyone open up like that for quite a while,” Kosmina said.

The 26-year-old had just minutes earlier seen his penalty saved by Wanderers ‘keeper Ante Covic but Kosmina said the Argentinean would have been champing at the bit to redeem himself.

“Knowing what he’s like, he would have been pretty annoyed with himself missing that penalty and he was going to make up for it one way or another, and he did,” he said.

Kosmina said he’s not surprised by the sudden impact his imports are providing, with DVD footage of Carrusca and Neumann enough to convince the manager to move for the pair.

“I’m not surprised, they were signed because of what we saw they could offer,” Kosmina said.

Wanderers Head Coach Tony Popovic said he had plenty to take away from the match despite the end result.

“We came up against a match-hardened side but there were some good patches for us,” he said.

“We go away disappointed with the result but there are certainly positives there from that performance.”

Youngster Aaron Mooy was one of the Wanderers’ shining lights against the Reds as his role as a deep-lying midfielder caused headaches for United throughout the match.

“He’s a good young player, he’s still got a lot to learn and a lot to improve on,” Popovic said.

“They’re a good bunch of players, they’re working hard for each other and we’re still trying to find our rhythms and combinations.”

Popovic saw his side again fail to fire in front of goals but feels his side need more time to gel.

“Some of these players have only been together for a month,” Popovic said.

“It’ll take time to get those combinations right.”

United’s Fabio Ferreira made his starting debut against Western Sydney and Kosmina said he was happy with the winger’s persistence and adaption to the game.

“He’s got pace to burn and he surprised me that he actually played as long as he did,” Kosmina said.

“I think the way he went on with it after a shaky start says a lot about his character,” he said.

Adelaide’s success in Kosmina’s first stint in charge came with the help of imported talent in the form of Shenqing Qu and Fernando Rech, mainstays of the Reds’ forwardline for the first two A-League seasons.

In newcomers Neumann, Ferreira and Carrusca, Kosmina looks to have found a fresh set of cult heroes for the home fans to cheer on.