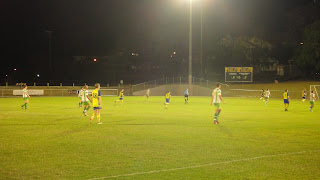 Mick van Moolenbroek opened the scoring for the Mackay-based Miners from the penalty spot before Strikers defender Alex Henderson’s own goal extended the visitors’ lead and ultimately sealed the result.
Unfavoured before the match, Miners secured their fourth consecutive clean sheet by stifling the Strikers in midfield while their defensive line effectively silenced runaway QSL Golden Boot, Matt Thurtell.
The match was keenly contested from the outset, a stop-start opening ten minutes setting the tone for an often physical and sometimes scrappy game.
The home side saw the best of the opening exchanges, with Michael Angus and Thurtell both unable to capitalise on opportunities just outside the box.
Matthew Zappone’s run to the by-line created the first chance for Miners, the right midfielder’s low cross taking a deflection in a crowded penalty area and almost sneaking in at the near post.
Shortly after, Brisbane believed they’d opened the scoring through Chris Di Sipio, however referee Sams Williams adjudged Thurtell to have impeded Miners’ keeper Brad Moss in the lead-up.
The game was turned on its head on 26 minutes when Miners were awarded a penalty after Henderson was deemed to have pushed van Moolenbroek in the back; van Moolenbroek calmly converting the subsequent spot-kick.
Twelve minutes later the Miners doubled their lead when Zappone picked up a loose ball in midfield.
The midfielder rounded his marker with a sharp turn of pace before unleashing a low shot toward the far post. Strikers goalkeeper David Chambers produced a remarkable fingertip save only to see the ball cruelly scrambled behind by Henderson, who couldn’t halt his desperate covering slide.
Buoyed by their two-goal buffer, Whitsundays became more adventurous and almost scored a third before the half-time whistle; Dan Corbett’s shot skimming the crossbar from an acute angle.
Shortly after the restart the visitors again missed a chance to seal the win, Jordan Conte striking a spectacular volley across the face of goal from 10 yards despite having time to control.
Brisbane upped the ante in response, with Di Sipio and Henderson both seeing solid attempts cleared off a congested goal line either side of the 50th minute.
Eager to quell any Strikers resurgence, the Miners sat back and were almost brought undone by Greg King, who forced two fine fingertip saves from Moss with two dipping long range efforts.
With time fast running out, an increasingly desperate and frustrated Brisbane side committed men forward and were fortunate not to concede on the counter. Chambers forced into a lunging, left-handed save by Corbett in the 84th minute.
It initiated a final five minutes of fast and frantic football, but the Miners continued to deny Brisbane the comeback their vocal home crowd demanded, subsequently securing their spot in next week’s decider.
Speaking after the game, Miners coach Graham Henry was full of praise for his side.
“I thought it was a game of two halves. I thought first half we were very good, going forward we took our chances. But the second half, I think Strikers dominated that second half and it was really backs to the wall stuff.”
“There’s no secret how Strikers played this year – they’ve been very effective at it,” Henry expanded, “We worked very hard on the two centre midfielders this week.”
“To be honest though, you can’t single anybody out. Everyone has played their role exactly how I asked them.”
Henry suggested that the club’s failure to secure a spot in next season’s Australian Premier League competition served to motivate his charges.
“As I said to the boys this week, they really are playing for their futures. You get yourself into a grand final, it’s something to put on your CV and coaches and managers will be more likely to have a look at you.”
Strikers coach David Large was visibly disappointed by the result that abruptly concluded his side’s season and continued a run of ruinous results in QSL finals football for the club.
“We just didn’t work as hard as we should have in the first half,” Large stated.
“I thought second half we did everything we could have possibly done to score goals and it just didn’t work for us tonight.”
Large dismissed suggestions his side peaked too early in their campaign, “I don’t think our form was poor tonight – I think we played well. I think they just scrambled a little better than us and probably got the run of the green.”
“I just don’t see what we could’ve done. I thought we picked the right team for the day, the right tactics. Everything I feel was right. I just think they got the rub of the green.”
Strikers captain John Costello was full of praise for his teammates despite the disappointing end to the season.
“I haven’t been involved with a group of players that commit to training as well as this group,” Costello asserted.
“It’s going to be difficult but we’re going to be searching for answers until we start again next year.”