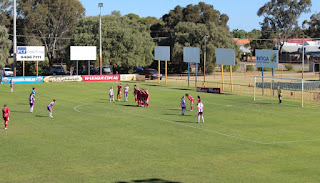 The Lady Reds went ahead against the run of play but goals from Kate Gill and Elisa D’Ovidio gave the hosts all three points.

With the temperature over 30 degrees for the entire game, the players did well to keep going for 90 minutes, aided by a drinks break in each half.

Glory dominated early on and came close to opening the scoring on 15 minutes when a McCallum cross to the back post found its way to Elisa D’Ovidio but her goal bound header was hacked off the line by Abby Erceg.

With 18 minutes gone, McCallum found the net after running through the Adelaide defence but the goal was bizarrely chalked off.

Assistant Jarrad Kennington flagged for another player being in an offside position, however referee Renee Silvester failed to consult with him and, presuming he meant McCallum, disallowed the goal.

Despite being under pressure for the majority of the half, it was the visitors who went in from on 41 minutes when a curling free kick from Ann Mayo found the top corner of Carly Telford’s goal.

However, Glory drew level in injury time at the end of the half when Gill finished past Kristi Harvey when the ball fell to her in the area.

The second half followed much of the same pattern as Glory continued to control the game, though they hit double figures for offsides which greatly disrupted their play.

Chances were few and far between, with both sides trying their luck from range, but neither keeper was really tested until the 80th minute when Harvey blocked D’Ovidio’s attempted lob.

The game looked set to finish a goal apiece until the 88th minute when D’Ovidio latched on to a long ball forward by Telford to score low into the bottom corner.

It was a deserved win for Glory in the end having been the better side, though Adelaide will be disappointed to have lost so late on.