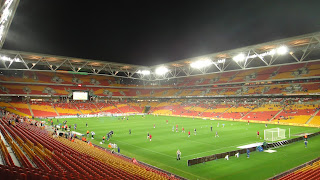 The visitors delivered an assured performance in the wet conditions with Mark Bridge’s historic 19th minute headed goal – the Wanderer’s first in a competitive fixture – ultimately proving decisive.
The goal came from a corner when Youssouf Hersi presented as a short option, the attacking midfielder’s ensuing cross finding the head of frontman Bridge, who turned the ball in at the near post from ten yards.
Prior to kickoff, Roar were touted as unbackable, short-priced favourites; however, the goal followed an even, albeit stilted, opening that saw both teams uncertain of the slippery surface.
Attacking midfielder Aaron Mooy signalled the visitor’s intentions early when his 4th minute shot from the edge of the area pinballed off both posts before bouncing back out – Roar goalkeeper Michael Theo looking on helplessly as the ball twice passed him by.

Following Bridge’s goal, Brisbane attempted to reassert home advantage – dominating possession, if not the chances, for the rest of the half.

The first salvo of shots came on 24 minutes when right midfielder Ben Halloran ran for Mitch Nichols’ slipped pass, however the youngster’s shot was blocked by an alert Covic before Broich blasted his follow-up well over the cross bar.

Western Sydney refused to stay out of the game though; Bridge’s 29th minute left-sided cross curling just beyond the reach of both Hersi and Kwabena Appiah Kubi lunging at the far post.

On 38 minutes, Roar fullback Jack Hingert pushed forward to out-muscle Nikolai Topor-Stanley on the byline, neatly toeing the ball back for an unmarked Nichols; the attacking midfielder’s subsequent ten-yard shot ricocheting back off the far post before being cleared.

Wanderers had a chance to extend their lead prior to the break when Joseph Gibbs beat Roar captain Matt Smith one-on-one, but the young striker pushed his shot wide of the near post from eight-yards.
Following the interval, Wanderers continued to make more of less ball – Japanese international midfielder Shinji Ono distributing assuredly for the visitors in the centre of the pitch.
Bridge also continued his promising first half form – shooting wide in the 50th minute – before a minute later Kwabena Appiah Kubi forced a save from Theo with a bobbled but dangerous 25-yard attempt.
Roar persevered before their home fans but still struggled to get behind the Wanderers back four – their evening epitomised when an out-of-sorts Broich resorted to an uncharacteristic long-ranged attempt just before the hour. It sailed well over.
Wanderers remained content to hold their lead and play on the counter against the defending champions. successfully springing more than once to catch-out their increasingly frustrated opponents – the former Ajax Amsterdam contracted Hersi heavily involved in the best chances.

On a 61st minute break, the right-sided attacker jinked menacingly at pace to shake scrambling centre-back Matt Jurman, before then skewing his left-footed attempt wide of the target.

Hersi popped up again in the 75th minute when his viciously struck half-volley from twenty-yards was tipped behind by a fully-stretched Theo.

Roar valiantly pushed for an equaliser in the final ten minutes but ultimately could not break down the determined Wanderers backline – Broich, Henrique, Nichols and Besart Berisha all clutching at the slightest of chances.

The result sees Wanderers move level with Roar on four points on the A-League ladder.