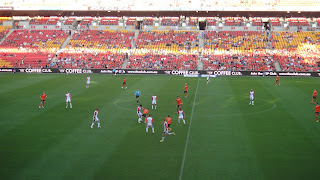 Adelaide United claimed top spot in the A-League after a smash-and-grab 1-0 win against defending champions Brisbane Roar at Suncorp Stadium.

The visitors took the lead in only the 3rd minute courtesy of Dario Vidosic’s 25 yard free-kick before holding on in the face of constant pressure from the hosts for the rest of the match.

The goal ensured the younger Vidosic claims bragging rights against his father, Roar manager Rado Vidosic, in the first meeting between the pair this season.

Brisbane dominated possession throughout the contest despite the scoreline, however the home fans were frustrated as their side were unable to convert a plethora of chances in the final third. By contrast, Adelaide threatened only on the counter after their goal.

Shocked by the opener, Brisbane valiantly attempted to restore parity in the first stanza, however their passing game failed to click in the early stages.

Mitch Nichols spurning the best chance when he blazed over the crossbar from six yards on 15 minutes. He then blazed over again less than a minute later.

Thomas Broich uncharacteristically attempted several shots from the edge of the area in the first period but, like Nichols, he repeatedly failed to find the target.

Meanwhile, Adelaide continued to threaten on the counter-attack  – Sergio van Dijk and Vidosic both heading wide of the target just before the half hour mark.

As the half drew to a close an increasingly frustrated Roar resorted to speculative shots from 25 yards – Matt Jurman and Erik Paartalu both earning the ire of their manager with their wayward attempts.

Six minutes after the restart, Adelaide thought they had extended their lead – van Dijk nodded home from a corner before referee Chris Beath ruled it out after spotting an infringement in the area.

Roar continued to push for an equaliser, Paartalu forcing Eugene Galekovic into a spectacular reflex save after steering Broich’s cross towards the near post on 53 minutes.

Not long after, Brisbane saw appeals for a penalty turned down after Berisha was tackled late in the area by Daniel Bowles just before the hour mark.

Roar continued to push for an equaliser in the final thirty minutes, but despite finding themselves in handy positions, the home side were unable to deliver the final pass – Broich and Stefanutto achingly close to finding a Besart Berisha with a series of low crosses.

Adelaide continued to defend valiantly in the final ten minutes, holding firm against a series of Roar corners to eventually claim the points.

The result sees Adelaide claim outright first place on the A-League ladder. While Brisbane, whose early season form has been erratic, fall to eighth.

0
Football Federation Australia have taken the unprecedented step of awarding Sydney FC the A-League Premiership for the 2019/20 season after it became clear the...
Read more
Westfield W-League

0
Despite the slight interruption in the past few weeks, it’s been an entertaining W-League season which is about to come to an end with...
Read more
Hyundai A-League

0
With Sydney FC ready to claim the A-League Premiership within the next few weeks, fans are slowly drawing their attention towards finals football. Love it...
Read more