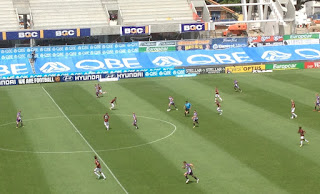 The winger was sent off in the first half for kicking out at Scott Jamieson but a spirited backs-to-the-wall showing, including some top drawer saves from Covic, meant that Iacopo La Rocca’s 15th minute header was enough for three points.

The defender rose highest just outside the six yard box to nod home a cross from Aaron Mooy, silencing the crowd.

Glory unsurprisingly dominated with the man advantage but couldn’t find the net as both Steven McGarry and Billy Mehmet struck the woodwork, while Covic denied Liam Miller and Nick Ward amongst others.

The return of captain Michael Beauchamp at the heart of the defence alongside Nikolai Topor-Stanley was a huge boost for the Wanderers, and they rarely gave lone striker Billy Mehmet a clear sight of goal.

Shinji Ono remained on the bench until after the 80th minute as youngster Aaron Mooy was given the job of pulling the strings behind Dino Kresinger.

For Glory, the absence of Shane Smeltz for personal reasons was a big blow and you can’t help but feel that he would have converted at least one of the chances created in the second period.

The defeat is Perth’s first of the season at home and they must pick themselves up for the visit of the Wellington Phoenix next weekend, while Western Sydney take on Melbourne Victory.