Steph Catley: Back in the Vee 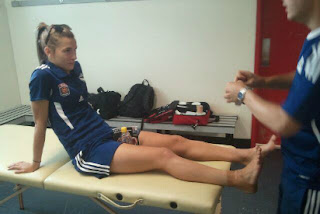 During rounds five and six of the 2012/13 Westfield W-League season, I found myself in China. Along with keeper and fellow teammate Brianna Davey, we were saying our goodbyes to our Melbourne Victory teammates early in the week and wishing each other good luck for our separate matches.

Bri and I were off on international duty for the Westfield Matildas to compete in qualifiers for the East Asian Cup.

In China, contacting home through social media is almost impossible as Facebook and Twitter are both banned. So trying to keep updated with what was happening in the W-League was very difficult and frustrating.

Though when game day arrived for the girls at home, we didn’t need to know much else other than we’d scored three goals and held Canberra scoreless. After a few proud smiles directed towards Matildas and Canberra United goalkeeper coach Paul Jones, we knuckled down to focus on our game against Chinese Taipai.

We started slowly but ended up winning 7-0 and then 4-0 against Hong Kong. We struggled to play through their tightly strung defensive structure, opting to instead cross the ball 83 times to be precise. By the end of the game, I had decided that I’d had enough of crossing and managed to score myself my first international goal.

The next few days flew by, filled with shopping, movies and lots of physio. The China match was the most important of the tournament and we’d known this from the very beginning. I had an interrupted sleep that night and hadn’t eaten as much at pre-match lunch that day due to nerves.

After a fairly even contest, China quite deservedly came out on top 2-1. We hadn’t played to our potential at all and China had really come to win. We found ourselves with our heads down at the conclusion of the game. We hadn’t qualified for our first East Asian Cup and hadn’t managed to win Tom Sermanni his last game as coach of the Matildas.

Tom has done so much for the women’s game in Australia; transforming the Matildas into a team who can compete with just about any other team in the world. He’s grown the game here from grassroots level all the way up to the national team and worked tirelessly behind the scenes to create a better environment for women in football.

So expectedly, the feeling floating around the change rooms after the game was shattering. Personally, I wasn’t happy with the way I had performed in the China game but will take this hurtful but extremely valuable experience to improve my mentality and strength for the next big game.

I arrived back home at around 1:30am on Sunday morning and couldn’t wait to get back to Victory training the next day. Although I’d arrived back after a 3-2 loss to Brisbane, the positive buzz was still radiating around the team.

The girls spoke about their first half as being poor but were happy with many, many aspects of the second half, noting mostly that they should have taken their chances and that the Brisbane girls took every single one of theirs.

We’re off to Adelaide this weekend and are looking to get back on the winners board.

We plan to be in the top four come finals and this weekend is another important step on the way to our goal. With such a close competition and an extremely short season, every single match counts. I’m so excited to put the big V back on this weekend!

Read all of Steph’s columns for The Football Sack.

Winner of 2011/12 Female Footballer of the Year in the Australian Football Fan Awards, young star for Melbourne Victory Women Stephanie Catley is a current Matilda and is a born and bred Victorian. Catch the W-League every week at your local ground or if you can’t make the game watch it on ABC1.

With another W-League season come and gone it feels like a perfect time for reflection and analysis. This past season has been hampered by the...
Read more
Melbourne Victory W-League