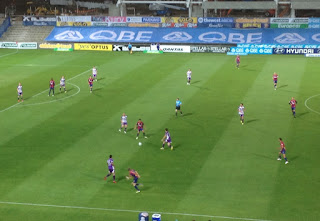 For the first time since Round 1, Emile Heskey failed to find the net as his Newcastle Jets side went down 3-2 to Perth Glory at NIB Stadium tonight.

Substitute Chris Harold stuck the winner five minutes from time to the delight of most of the 9,293 spectators in attendance.

The run up to the game was all about Heskey’s first appearance in the west, and the big striker had a chance to open the scoring inside five minutes, latching on to a James Virgili cross, but Bas Van den Brink blocked his shot.

It was the visitors who took the lead shortly after when he a corner to the back post found an unmarked Josh Mitchell and the former Glory man headed the ball back across goal where Tiago Calvano was on hand to score with his thigh.

Glory drew level in the 11th minute though and it was cracking goal from Steve McGarry who was hanging outside the area as a corner was half cleared. His first time shot flew through a crowd of players and into the bottom left corner.

With Dominik Ritter absent for the Jets, Craig Goodwin was forced to play a deeper role than usual at left back but himself and Scott Neville, playing on the opposite side, pushed forward at every opportunity.

Skipper Jobe Wheelhouse was set up in the ‘Erik Paartalu Role’, dropping deep between the two centre halves to make a back three when Neville and Goodwin went forward.

Nick Ward was the man given the nod to replace injured Glory captain Jacob Burns in the middle of the park and he was on hand to give Glory the lead after 38 minutes.

Scott Jamieson fired in a delightful ball on the left and when Dean Heffernan’s header was well saved by Mark Birighitti, Ward was on hand to score with the rebound.

Glory could have gone in to half time even further ahead but Birghitti saved well from Ward while Jamieson had a goal incorrectly ruled out for an offside decision against Heffernan.

After a quiet first half, Heskey was much more involved in the second period and should have scored just after the hour when he connected with Scott Neville’s low cross, but his effort popped up harmlessly into the arms of a grateful Vukovic.

On 71 minutes, Vukovic was beaten as Mitchell got a touch on a Heskey header to score, and it was just reward for the Jets who had been dominating for some time.

The Englishman was then denied by the outstretched leg of Vukovic as he struck a low shot goalwards from Ryan Griffiths’ cross.

Glory dug deep though and found a winner in the 85th minute when Harold was on hand to fire home from inside the six yard box after Birighitti had dropped a Liam Miller corner.

The A-League transfer window has barely opened and already Perth Glory have made a significant move, with Dutchman Guyon Fernandez dumped in favour of...
Read more
Love your football?
Subscribe to our weekly football wrap. During the season we'll send you all the week's football action straight to your inbox.